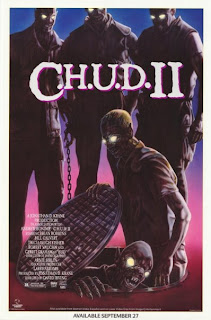 C.H.U.D. II has the grim reputation of being one of the worst horror sequels ever made. I remember thinking so when I first saw it when I was a kid, staying up late to catch it on USA Up All Nite. However re-viewing the film all these years later I have come to the conclusion that it actually isn't a terrible film, it's just grossly misunderstood and misrepresented by its title.

The ultra cool original poster art had the monsters look like C.H.U.D.s but this is just an illusion. This really isn't a C.H.U.D. film despite the title. According to some sources this was actually written to be a Return of the Living Dead sequel. This makes complete sense to me. First it has a similar silly tone to Return of the Living Dead Part II, a tone that goes against the complete seriousness of the first C.H.U.D. . Second our C.H.U.D.s don't look like the C.H.U.D.s present on the poster art or in the first film. These C.H.U.D.s look like, well, zombies! The C.H.U.D.s even scream MEAT as opposed to BRAINS. No wonder fans of the first film were totally confused and pissed off!

The film opens in a military lab, lead by Robert Vaughn, who is doing experiments with "C.H.U.D.s" in order to use them as military weapons. Hmmm...sounds like Return of the Living Dead III to me! Our head C.H.U.D., named Bud, gets kidnapped by some students wanting to use him for a science project. He awakens, stumbles around biting everything in sight (including a dog and a fish), spreading his "C.H.U.D." virus creating an army of the "undead." The undead end up trapping a group of students in their school during a Halloween dance.

Like I mentioned before this film is just silly, acting just as much of a comedy as a horror film. People who saw the first film are going to go "What the fuck?" due to its complete tone shift. Despite this I found myself actually chuckling at a few scenes as Gerritt Graham being great as our lead C.H.U.D. Bud. People who like horror films that are completely silly will find something to enjoy here. I however have to bitch out Vestron Pictures and the filmmakers for fooling audiences into thinking this was a "true" C.H.U.D. sequel. Vestron even had to gal to remove the subtitle "Bud the C.H.U.D." from the original kick ass poster art to fool people into thinking this was going to be a serious film like the first entry. WRONG! No wonder people hate it. Maybe this film would have more of a following today if they actually advertised the film the way it is instead of pulling a veil over it. Even today this film is still shit on and there isn't even a U.S. DVD release yet. Again thanks to my friend Bill who scores me copies of all these forgotten films, I was able to re-watch the film and actually somewhat enjoy it for what it really is, a silly zombie comedy and NOT a serious C.H.U.D. film!