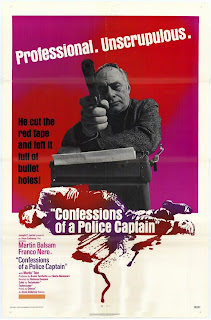 Being a huge fan of poliziotteschi (Italian Crime) films, I jumped at the chance to purchase Wild East's DVD release of "Confessions of a Police Captain" which was also partly due to the fact it starred Italian great Franco Nero. Franco Nero is one of my all time favorite actors and will happily watch any film he stars in. I actually was apprehensive going into this film at first despite liking the genre and Franco Nero. I was apprehensive due to the lackluster title. I know better than to judge a film a film by its title but I was use to poliziotteschi films having awesome and attention grabbing titles like "Rome Armed to the Teeth" and "The Cynic, the Rat and the Fist." The title "Confessions of a Police Captain" reminded me more of a boring TV made movie. Thankfully upon finishing the film it came out much better than its lackluster title promised.

This film stars American actor Martin Balsan as our burnt-out Police Captain and Franco Nero as our newly appointed District Attorney. The police captain is at wits end with corruption in the cities politics that leads up to mayor himself so he concocts an elaborate scheme to bring all the corruption out. The District Attorney, despite being new to the scene, also sees all the corruption around him and must decide to put his career at risk to make it known.

The best part of this film is, not surprisingly, the cast and Martin Balsan and Franco Nero bicker and shout at each other throughout most of the film. The captain thinks the district attorney is corrupt and vice versa and they are both hell-bent on proving that the other is padding their pockets with money from the wrong side. Martin Balsan has always been an underrated actor in my humble opinion. I know him more for his small roles in Cannon productions like Death Wish 3 and The Delta Force but his acting even shines in those B-Flicks. Here he actually has a good script to actually make his great acting get noticed.

My one complaint is the film is extremely full of dialogue and plot and not on action. People looking for rousing action scenes that usually accompany poliziotteschi films will not find it here and are better off watching the works of Enzo G. Castellari and Umberto Lenzi instead. I prefer my poliziotteschi films to have some great action and came out of the film a little disappointed it didn't have any. I also wished the ending tied up some loose ends better but overall I found the plot engrossing and engaging with some violent sequences thrown in every now and then for good measure.

This is a bleak, depressing poliotteschi film with a good plot, great cast and very little action. Fans of poliziotteschi films that are able to get engrossed in films with little action will find a lot to like but otherwise Italian action fans are recommended to find their kicks in other films.