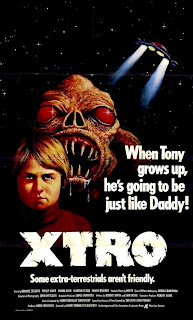 Like many films from my childhood, I rented or bought based on titles and box artwork alone and what could be cooler than a film that began with a letter "X" and featured a deadly, ugly-ass alien on the cover artwork? Far be it from me I was in store for one of the most schizophrenic, convoluted and all around fucked up films I had ever seen  that would seriously screw up my whole outlook on life! 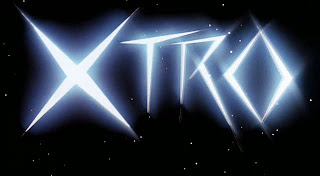 We open with a loving family vacationing in their village home when the father gets abducted by aliens. Years later, out of the blue, the father shows up again to rejoin his family. Two problems: 1) his wife has moved on with a new lover and 2) he is now a bloodsucking ugly fuck of an alien! Now daddy wants to change his son into a skeletal alien and take him to his new home, but not before he kills many people in gruesome ways along the way.
I can't explain how thoroughly fucked up this film is. First of all director Harry Bromley Davenport goes out of his way to make this one of the most gory, grotesque and nauseating  films I have ever seen when it comes to bloody special effects effects. Blood is the name of the game and when you think Davenport can't out due himself, he shows a women, recently impregnated by an alien, give birth to our abducted father as a full grown man in mess of blood and guts flowing from between her legs. It's a jaw-dropping and gut-wrenching sequence that the film has become widely known for.
The plot is an absolute mess with crazy ass shit happening all over the place. Our abducted father melts phones, eats pet snake eggs but the film hits the 'bat shit' crazy button when our young boy brings his toy soldier to life to kill his bitch of a neighbor. Where the fuck did this scene come from? Hell a demonic midget clown and a black panther even make an appearance to make the audience think they've gone into complete hysteria!
The cast of British actors is surprisingly good for this type of gore flick (including the sexy future Bond girl Maryam d'Abo doing a full frontal nudity scene) and the film does have a really bleak, morbid and bizarre atmosphere that I dug, but I do suspect the atmosphere was all by complete accident. Overall "Xtro" is just a schizophrenic mess with everything but the kitchen sink thrown into the plot to shock and awe the audience. This schizo feel and morbid atmosphere is actually what makes "Xtro" worth watching, if one can get past the awful screaming synthesizer soundtrack provided by none-other than the director himself. For fans of the fucked-up, grotesque and bizarre, "Xtro" is definitely a must watch. Followed by two completely unrelated sequels.

Written By Eric Reifschneider
Posted by Cronosmantas at 8:25 PM