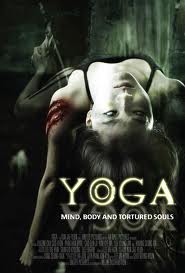 Correct me if I'm wrong, but my expectations for a horror film about yoga were pretty low. The trendy and spiritual exercise didn't seem to have a strong case of "great horror film concept" from my knowledge and having a ghostly film about it seemed even less inspired. Guess I was corrected because as it would turn out, "Yoga" was actually a fairly well executed film. This film never feels all that unique (Asian ghost films have become something of their own genre at this point), but it's crafty visual prowess and strong atmosphere eventually won me over.

Hyo-jeung (Eugene) had her entire life dumped on in a matter of days. Her relationship with her film obsessed boyfriend is on the rocks, her friends are all garnering more success than her in life, and she just lost her TV hosting job to a more beautiful woman. Her self esteem is rock bottom, but an old friend lets her in on a little secret. There is a week long and very intense yoga class that only a few know about and she is the perfect candidate for it. She enrolls with a handful of other desperate women who all seem as torn as her. When the other classmates begin to disappear from breaking the "rules" of the school, its Hyo-jeung who has to face a more sinister plan behind the class...

What was so surprising about "Yoga" was how similar it came in comparison in themes and general approaches to the long time Italian classic "Suspiria". Group of young women gathered for an artistic body shaping class who eventually discover that its a cover for witchcraft? Well "Yoga" isn't necessarily 'witchcraft' by any means as it never uses that term, but the ghostly apparitions are created by 'supernatural' elements. Just the general plot seemingly follows the basic formula too.

The film also happens to be similar it how it goes about crafting the plot. Director Yoon Jae-yeon boils it down to give the film a very distinct aesthetic look and coats it all in some insanely thick atmosphere. Does a lot of the things that happen or details to create this atmosphere make sense? Hell no. Themes of snakes (including a very creepy hissing/slithery sound effect used repeatedly) and ghostly horror/death scenes rarely make sense in style or in how the movie progresses, but damn if they aren't great for the atmosphere! The setting, the actresses, the sound effects, and lighting all create a visual feast of horrific intent.

The film does not make a lot of sense though. For those who actually cared to try and really piece together the puzzle of the yoga class and how the flashbacks to an old film set correlated, the film ended up being quite a jumbled narrative. The ending definitely left logic at the door with its "trick" ending and atmosphere coated final showdown between our heroin and the head yoga hauncho, but that's expected by the time we get there despite its well crafted characters in the first act. The lacking originality for the death sequences was a little odd coming off as a combination between "Ju-On" and "A Nightmare On Elm Street" with its dream like qualities. They were more run of the mill for what the film could offer even if the special effects were spectacular.

For a horror film about yoga, "Yoga" was definitely a pleasant surprise in quality. Not all that original with lacking sense and death sequences, the actual horror of the film is created by the vicious visual work and intense atmosphere that's slathered on in massive doses. Fans of the J-horror genre or the Asian Ghost film will certainly find plenty of great elements to latch into.

Written By Matt Reifschneider
Posted by DarkReif at 10:39 PM