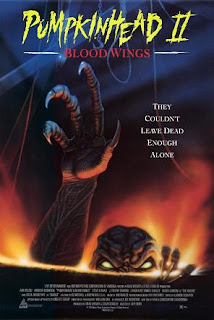 
"Pumpkinhead" is one of the finest unsung horror films of the late 80s that I constantly find myself defending against people that judge it by solely by it's peculiar title. It was a tremendous horror concept that was ripe for a sequel but one didn't arrive right away. It took six fucking years for a sequel to emerge, direct-to-video no less, and the final results show that all involved weren't particularly interested in making a worthy sequel, only riding the coattails of an established horror title to line their pockets. 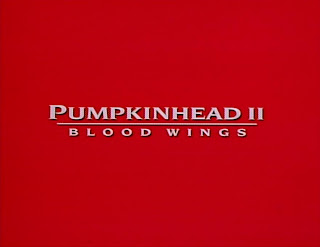 The plot totally disregards the first film and basically rehashes it by loosely remaking the story. The film begins in 1958, shot in classy black and white, where a group of young studs kill a backwoods deformed boy. Flash forward and a new sheriff arrives in a small southern town (which is again obviously southern California) only to have his work become a living hell as grisly murders start springing up all over the area. It seems the local legend of a vengeful demon nicknamed Pumpkinhead are true and it has risen to take revenge and somehow he sheriff's daughter is involved in the bloodshed.
The producers had no intention of making anything more than a run of the mill direct-to-video sequel and who better to direct a lackluster sequel than Jeff Burr, the man who give us such mundane sequels as "Stepfather 2: Make Room for Daddy" and "Leatherface: Texas Chainsaw Massacre III". His direction is on complete autopilot and the dark atmosphere and tone that  Stan Winston so brilliantly displayed in the original is absent. In its place is lazy cheapness with an emphasis on fucking strobe lights to add to so-called "terror".
The production values also leave a lot to be desired, such as the make-up on the old hag that has the ability to summon Pumpkinhead. The graveyard that is Pumpkinhead's resting place is also hastily put together and pales in comparison to the grim  pumpkin patch of the original. The Pumpkinhead design, though good from reputable company KNB effects, also isn't near as impressive as Stan Winston's grand original design but it's not helped by poor lighting making the beast look more fake.
The cast is made up of some respectable members but the real humdinger is Andrew Robinson, best known for playing the Zodiac killer in the original "Dirty Harry" and the father in Clive Barker's "Hellraiser", helps make this weary sequel better than it really is. However it is embarrassing to see him in such tripe as he is far too good of an actor to appear in direct-to-video drivel as this. It still makes me wonder why he would turn down a respectable sequel like "Hellbound: Hellraiser II" only later to appear in a film like "Pumpkinhead II".
I have come to the conclusion that producers with money to burn wanted to make a sequel to a popular horror film to guarantee a good profit and thus the original "Pumpkinhead"  became their target. Not only does this passable sequel disregard all the events of the first film, it also waters down all the admirable aspects like the score, the dark tone and even the make-up effects. Skippable and only for the most die hard, and forgiving, horror fan.