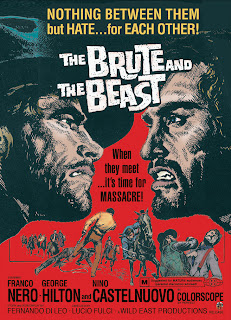 THE BRUTE AND THE BEAST

How could a Spaghetti Western combining the keen eye of iconic cult film director Lucio Fulci and the star talents Franco Nero and George Hilton not be good? As I predicted this unbeatable trinity of cult icons is an Italian film fan's wet dream making "The Brute and the Beast" (aka "Massacre Time") one of the all time best Spaghetti Westerns a fan can get his hands on.

Nero plays a very Django-like character that arrives home to find that a land baron and his sadistic son are bullying their way into buying up all the land in the area. Nero, with the help of his alcoholic brother (George Hilton) are hell-bent on seeking revenge, but Nero discovers he has more ties to the land baron and his son then he ever thought possible.
I have seen dozens of Fulci films with "The Brute and the Beast" being the oldest film I have yet to see in his lengthy filmography and even early in his career he had an amazing eye for gritty style and atmosphere. As a matter of fact it makes me almost sad to see how good he was back in the glory days as most his films in the latter half of his career are just down-right terrible. Hell his style here is on par with the Leone films to come prior with catchy camera angles and a plethora of violent action scenes. There's no gore to hint of his horror films to come but he still liked to shock audiences shown here with a graphic dog attack, a violent whipping and even the brutal murdering of a woman and child.

Franco Nero, hot off his debut in Sergio Corbucci's "Django", plays a similar stoic role. Compared to more lively roles he would play later, his character here is a little more stale but he still has plenty of screen presence. Nero is actually out shined by new-comer George Hilton who gives a tour-De-force performance as his alcoholic brother. Unlike Nero's stoic, emotionless character, Hitlon's has a cynical, almost goofy outlook on life and his stage play training shows through with his magnificent performance. Hilton was so good that he would rightly earn his own place in Spaghetti Western history matching Franco Nero's star power and thus became a star of uncountable Italian films in varying genres to come.

"The Brute and the Beast" is well deserving of its reputation in the Spaghetti Western genre as it is not only one of the best films in Lucio Fulci's filmography, but one of the best Spaghetti Westerns in general with a violent, gritty tone and an unbeatable cast. The film was only previously released in muddy Full Frame VHS transfers until Wild East unleashed their beautiful anamorphic widescreen release with a copious amount of extras, including a rare audio interview with Lucio Fulci further proving what an utter jackass he was. He may have been an ass, but damn did he make some great cult movies with "The Brute and the Beast" being one of best.

Written By Eric Reifschneider
Posted by Cronosmantas at 8:45 PM