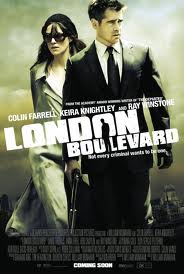 It's odd because if you asked me my opinion about Colin Ferrell even five years ago I would have mumbled something about a no talent hack who sucks in "Daredevil". If you ask me about Colin Ferrell today - I love the guy. Quirky, does random movies, and generally loves to be in genre flicks. "In Bruges" is one of my favorite comedies of all time and his penchant for genres I love makes him a regular in my movie watching queue. "London Boulevard" looked to only add to the reputation for the actor. Looked, mind you. Turns out that Monahan's directorial debut is something of a confused picture. It delivers intriguing characters that fail to intrigue and a plot whose leaping structure flows horribly. Definitely not the kind of film one would hope for from the talent involved.

Mitchell (Ferrell) is free from prison. After doing a three year stint for some questionabe activity as a criminal, he is out and looking to right himself in life. Of course the usual suspects show up trying to get him back into the game, but he's determined to make it as an addition to regular society. This is why he takes up a position as handyman/body guard for a recluse actress (Knightley). It doesn't take long for the mob he used to work for to make their way back into his life and push him to new levels. Now Mitchell has to make a decision to end all of the pressure for good, but will it compromise his new life?

For those not familiar with Monahan, he's mostly a screen writer having written the screenplays for "The Departed", "Edge Of Darkness", and "Kingdom Of Heaven". That's a hell of a resume. This partnered with the quirkiness of Ferrell and Knightley made for a very tempting film in the form of "London Boulevard". Yet despite all of the talent mentioned above, the film fails to connect with its audience at any level. Both of our leads - and a stunningly well cast secondary - own their respective roles with subtle acuteness to detail and plenty of silent moments for them to strut their stuff. Even Monahan does an admirable job giving us some very artistic moments in the script and in his directing to add some nice depth to a rather basic plot. This film if filled to the brim with great elements.

The reason why "London Boulevard" was such a massive disappointment breaks down to its inability to navigate these great elements. It never comes together. It's like having a million dollar vase that's broken beyond repair. Yeah, when put together it would be fucking awesome. It's just broken and doesn't fit together. The film is choppy as hell as it seemingly throws together random scenes to try to form a narrative and half the time I felt as though I was missing quite a bit of information to truly connect with Mitchell and his plight. His crime story leaves me apathetic. The romantic subplot leaves me apathetic. It doesn't flow and it loves to meander through moments that seem useless in the overall spectrum of the story.

Bless their heart for giving this film their all, but Monahan wrote a miss when he adapted this story to film. Each element, on it's own, is relatively impressive - but when I sat down to write this review and thinking back on "London Boulevard", it left me with no overall emotions good or bad. It was a 'meh' film experience and with the talent involved in this film, it's a massive disappointment.

Written By Matt Reifschneider
Posted by DarkReif at 5:34 PM