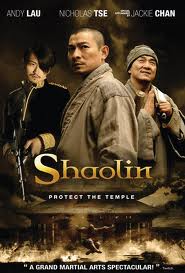 Our friends at Well Go USA have certainly done the cult world a favor. They bring over some of the best modern Asian cinema that the industry has to offer with the likes of the "Ip Man" films and "The Man From Nowhere", so any release of theirs is guaranteed top quality. This of course is only heightened by the fact that "Shaolin" is a star studded film of some of China's top talent. Produced and directed by Benny Chan, starring Andy Lau, Nicholas Tse,  and Jacky Wu (credited as Wu Jing), with action direction by Corey Yuen. With names like that attached, there is no way that this film could be bad.

A vicious warlord Hou Jie (Lau) has arisen to become one of the most powerful that China has ever seen. His paranoia for power leads him to heavily depend on his protege Cao Man (Tse), but when a sting against one of his allies goes massively wrong Hou Jie is left with nothing in his life. His status: gone. His family: gone. His drive: gone. He finds himself at a Shaolin temple he previously mocked as a broken man, only to discover that the hatred in his heart was only craving peace. When his protege Cao Man comes looking for him, Hou Jie will have to lead his brothers of Shaolin against a formidable force and correct the biggest mistake of his past life.

Martial arts films are fairly rare anymore, particularly on this side of the Pacific Ocean, and ones that contain the heart and soul of "Shaolin" are true gems. This is a film that not only entertains with its highly adventurous visual style and stunning action set pieces, but it looks to build these grand characters anyone can relate to with moral lessons and mountainous character arcs. It accomplishes both with flow and charisma. Never coming across as preachy in the ways of Shaolin, but never letting the depth of its story and people slip through the cracks either. Benny Chan does a remarkable job balancing out the action to the story and it truly highlights the accomplishments of "Shaolin".

The obvious main attraction to the film though is the stunning work of Andy Lau. The man never ceases to impress whether its with his comedic timing, action films, singing (he sings the main title song for the film), or his unbelievably real dramatic work. He simply owns this movie. He does it all. He rips on our heart strings while kicking ass and singing songs. His supporting cast helps substantially with Tse giving us a cold hearted and vicious villain and two great roles for Wu Jing and Jackie Chan, whose 'special appearance' credit is a full on supporting cast role with character arc and everything!

Occasionally some poor CGI moments show up, like an awkward chariot battle over computerized cliffs that has great pacing but doesn't look up to par as the rest of the film, but beyond that "Shaolin" is damn near the perfect film. The fighting is intense and well choreographed with dibs to the explosive finale that brings the house down. Martial arts fans will not be disappointed with the entertainment of the film in these parts are there is plenty to get the heart racing.

"Shaolin" is all the best aspects of a martial arts film rolled into a massively entertaining and emotional jaunt. With characters to love and hate, action to blow you away, and writing that brings out the true heart and soul of why martial arts can be an integral part of human existence - "Shaolin" does it all with style and magic. A must see for an self respecting martial arts fan.

Written By Matt Reifschneider
Posted by DarkReif at 10:36 PM