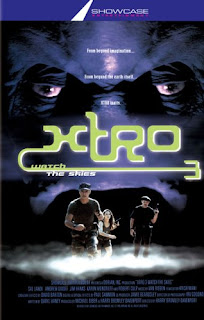 You thought you were horrified by the "Xtro" alien raping a woman in the original film? There was a much more heinous action going on behind the camera as director Harry Bromley Davenport was raping the "Xtro" name in order to make the completely unrelated and lame "Xtro II: The Second Encounter". But he wasn't done taking advantage of the "Xtro" name yet, oh no, he bent that Xtro bitch over the table one more time and let the motherfucker have it in order to make yet another unrelated sequel. Sure the final product comes out a hair better than that garbage second entry but I doubt many will be tuning into the series by this point, except people gung-ho on torturing themselves like me apparently.
A group of military soldiers are sent to a remote Pacific island in order to prep it for a new fueling station. Of course it's a military cover-up and it ends up a 50 year old alien is trapped on the island and our dimwitted soldiers unwittingly release the bastard from his concrete cage and he goes all 'predator' on their ass, blaming the soldiers for the death of its mate and child.
Whereas "Xtro II" ripped off "Aliens", Davenport enlisted writers to rip-off another popular killer alien flick, this time "Predator", right down to the alien creature having the ability to camouflage itself with invisibility. Though the alien's look is far from looking as grand as Stan Winston's brilliant design, I do have to give the film credit as it is still refreshing to see a practical effects as opposed to crummy CGI which was starting to rear its ugly head in cheaply made sci fi movies at the time (some bad CGI does make an appearance but it's very limited).
Davenport's direction seems more involved than he was in the second film, but it's still very pedestrian not added by a shoe-string low budget. I did dig the Alien revenge aspect of the plot but overall Davenport has the film move at a dull pace and it's hard to get involved with annoying and one-dimensional characters, even with veteran actors Robert Culp and Andrew Divoff making easy paycheck appearances.
I will admit Davenport did seem to try with this film, but it's still a failure thanks to a cliché plot, bad acting and overall shoestring budget. I did like the use of practical effects but overall it just seems like another forgettable direct-to-video sci fi  flick that barely ekes above the drivel you would catch on the Syfy Channel at 1 in the morning. "Xtro 3" would be totally forgotten today if it weren't for its namesake tying it to the cult following of the 1983 original film. Hell, I'll admit, it worked on me.  This might come as a total shock but skip this film and stick to the psychotic original.

Written By Eric Reifschneider
Posted by Cronosmantas at 6:52 PM