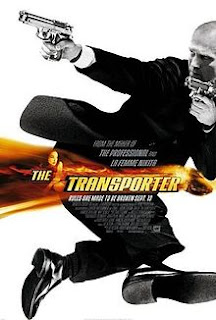 There is something charismatic and enjoyable about "The Transporter". I won't lie to you and tell you that it's a great film whose acting and story will redefine modern action films. It doesn't. It's a full throttle Luc Besson film where the ridiculousness of its premise is only carried through by the extensiveness of its action and charm of its lead. Often enough "The Transporter" is a silly plot hole riddled film whose by the numbers story rarely breaks action film formula for more than a few seconds. That being said it has three things going for it. 1) Jason Statham in his 'I'll kick your ass and charm you at the same time' mode. 2) Action sequences done by Corey Yuen. 3) A nonchalant attitude towards anything you can bitch about. These three things make "The Transporter" one of the most ridiculously fun action films of the last 20 years.

Frank Martin (Statham) is the best of the best when it comes to transporting cargo. He never asks questions, he sticks to the deal, and he's arrogantly effective at it. He's an expert at driving and evading and he never breaks the rules. When a deal goes sour and a ruthless business man tries to kill him, Frank decides the rules have to be void and he goes out to get his due only to find that the humanity within his cold killer heart might take him too far as he attempts to help a young woman (Qi) in need.

"The Transporter" is rarely a top quality film, but the sheer enjoyment that I receive from watching it overrides any of that. Luc Besson can take the oddest and most simplistic story, make it outrageous, and somehow pull it off with style. Co-directed by Leterrier and Yuen, the combination of action and a lead character we love to watch tear shit up is lethal. Statham owns the role as Frank Martin (the role that really kick started his career as the leading action star for this generation) and his ability to be both scary, funny, and heroic is innate to this film working. He chews up scene after scene and even when the film gets really ridiculous like parachuting onto a semi from a crop duster or the 'oh damn!' over the top attack on his house, he owns it like it isn't as stupid as it is. This ability to transverse the silly plot, through both Statham and the directors, makes "The Transporter" significant fun.

It also helps that "The Transporter" never falls into a 'modern action' routine of over shaken cameras and too much editing. The fight sequences are simply stellar. The hand to hand combat is over the top and intense with gun fights galore, a knife fight in the middle of a bus, car chases, and a throw down on an oil spill where Frank uses bicycle pedals on his feet to keep balance. Yes, it might be over the top and ridiculous - but Yuen plasters the film with amazing choreography and enough charm to make all of it memorable and flashy. Without the gimmicks of camera tricks.

It's understandable why "The Transporter" became the go to action franchise in the last decade. Statham owns as the lead and the basic story can go a thousand places with ridiculous moments and action packed set pieces. Perhaps not the high quality film some would want to see (I would have liked to see a stronger leading lady for the film), but it does everything it can with what it has to win you over. Blood Brother approved!

Written By Matt Reifschneider
Posted by DarkReif at 5:15 PM