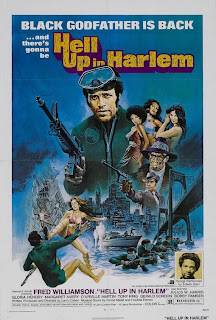 HELL UP IN HARLEM

Even before the "Black Caesar" reel spun to an end after it's first theatrical showing, American International Pictures new they had a huge moneymaker and demanded a sequel. Writer/director Larry Cohen was more than happy to obliged but only one problem kept his sequel from reaching the Godley Blaxploitation stature of the original.... it was AIP wanted the sequel yesterday and the mega rushed production rears its ugly head throughout the entire running time of this quickly made, but still enjoyable sequel to the monumental Blaxploitation classic "Black Caesar." 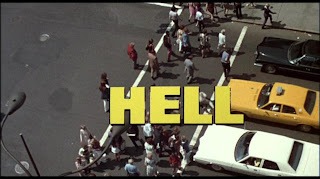 The plot picks up right after the first film ended with our title character (Fred Williamson returning) dying in the ruins of his childhood home, clutching the ledgers that contained evidence of every corrupt political and influential individuals in New York. His dad comes to his rescue, saving his son and soon it's daddy and son hitting the streets take sweet revenge on all the politicians that put a hit to have our Harlem godfather killed.
The first major problem with this sequel is that it was made so quickly after the first film that Fred Williamson was already busy with another film obligation. Instead of waiting till he was done, Cohen was forced to start shooting the film without his main star and thus a stand-ins had to be used in many shots. Cohen does his best to use clever editing techniques and camera angles to try to hid the fact the actor wasn't there for the entire shoot but it still comes off rather choppy and obvious, taking me out of the picture momentarily.
The second problem is Cohen's plot seems condensed to fit into an standard running time. There's enough material here to drag out the engaging story of our black godfather into two more films but apparently AIP didn't feel so Cohen's script moves along too fast, with too many subplots for audiences to keep up.  By the time the ending comes around I just felt hallow due to all the subplots not being resolved properly in the amount of time allotted.
Considering all the challenges and brick walls Cohen faced with making this sequel, he still did a credible job and surprisingly, for the most part, makes the film mostly work despite all the flaws caused by its rushed production. Williamson is likeable as ever in his cool yet dark antihero role and I dug the expanded role of his father (Julius Harris, doing a wonderful job). The James Brown-less music is also commendable making this flawed sequel still a must see for fans of the original.

Bonus Praise: The film was original made as "Black Caesar's Sweet Revenge" but the producers demanded a title change as this was released so close to the first film that they were afraid people would mistake this sequel as the first film. I don't quite understand this as both "Shaft" and "Slaughter" had similarly titled sequels with "Shaft's Big Score" and "Slaughter's Big Rip-off". However, despite the title change, I have to say "Hell Up in Harlem" is a badass title. If one must change a film's title, make sure it's badass like "Hell Up in Harlem."