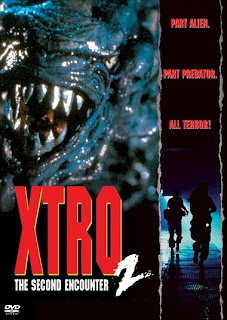 Eight years is a hell-of-a long time to wait for a sequel, especially to a film so poorly received like the 1983 alien gore flick "Xtro". Still, in all its trashy onslaught to the senses, "Xtro" garnered a strong cult following on the home video market after a lukewarm reception in theaters and this small legion of fans were ready to lap up this long-awaited sequel to their gooey guilty pleasure.  Despite being made direct-to-video, fans still had hope this sequel could match the bizarre schizophrenic nature of the original since British director Harry Bromley Davenport would be returning behind the camera. All I can say is fans were NOT dished up a sequel they were expecting but instead a steaming bowl of alien excrement left over from extraterrestrial in the original movie. 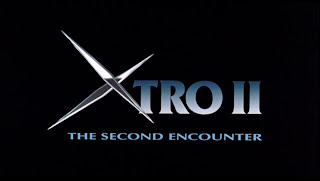 A government experiment goes haywire in an underground facility when some soldiers disappear after being sent to an alternate dimension. In comes Jan-Michael Vincent collecting an easy paycheck as an ex-scientist on the project who is begged to come back to save their lives. Soon one of the soldiers returns, but the kicker is she's been impregnated by some interdimensional alien and out pops a killer alien baby out of her chest (sound familiar?) and grows to a considerable size. Now our remaining scientists and soldiers have to hunt it down in air ducts and kill the damn thing before the lab self destructs.
"Xtro II" is a sequel purely motivated by money and director Harry Bromley Davenport has even admitted in interviews that he only made the film because he needed a job... and it shows. Through a quirk in contract he retained the rights to the title "Xtro" but not to the storyline thus he employed four screenwriters (it took that many to make this mess?) to write up a completely unrelated story, sign on some second rate actors and run with it.
The plot is nothing but a second rate clone of "Alien" and "Aliens" right down to Davenport trying to emulate James Cameron's style his celebrated sequel. Unlike Cameron's film "Xtro II" will never be a well received follow-up, even among fans, as Davenport seems purely on cruise control giving the film none of the likeable psychotic atmosphere and energy he displayed in the original. To top it off has-been actor Jan-Michael Vincent seems like he could give a shit to appear in such a silly monster movie as his performance is phoned in and is as distant as the alternate dimension the alien creature comes from.
I enjoy "Alien" rip-offs as much as the next B-movie enthusiast but "Xtro II" is one of the most lame of the bunch. It's just dull, non-enjoyable and all-around artless film that is completely unrelated to the guilty pleasure original and in turn alienates the fans in the process. Due yourself a favor, check out "Creature", "Galaxy of Terror" or "Forbidden World" for an entertaining trashy "Alien" rip-off and blast "Xtro II" through the airlock into outer space to collect with all the other space junk clogging our heavens. This wouldn't be the last Harry Bromley Davenport would rape the "Xtro" name as "Xtro 3" would infect video store shelves 4 years after the fact.

Written By Eric Reifschneider
Posted by Cronosmantas at 7:44 PM