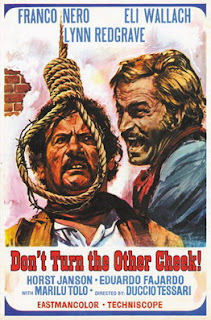 DON'T TURN THE OTHER CHEEK!

AKA "Long Live Your Death"

The politically charged and the comedy western are two of the most popular subgenres under the Spaghetti Western umbrella and one would think the two would mix like oil and water but on a few occasions they worked wonderfully mixed in the same film. Examples include Sergio Corbucci's "Companeros"  and of course Duccio Tessari's  "Don't Turn the Other Cheek!" (also known by it's much more serious European title "Long Live Your Death"). Tessari' s film may not mix the genres as well as Corbucci's "Companeros" but the equally strong powerhouse cast and solid directing still makes this a must see. 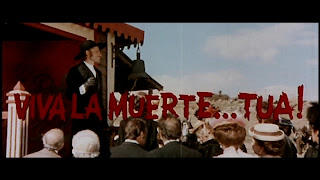 What we have here is three strangers, similar to the relationships in "The Good the Bad and the Ugly, coming together in order to find a cache of gold. One is a Russian prince (Franco Nero), the other a mexican Bandit (Eli Wallach) and the third is an Irish extreme Journalist (Lynn Redgrave, Nero's future sister-in-law). Can they avoid killing each other while escaping the noose and bullets to find the cache of gold and start a revolution in the process?
The main draw of this western is the cast with  Franco Nero and Elli Wallach having a wonderful chemestery that got me laughing hard on many occasions. Nero's Prince is similar to his character in "Companeros" and Wallach's bandit seems like a take-off of Tuco in "The Good, the Bad and the Ugly" so if you enjoyed their performances in those two films then you are going to eat this up.  Redgrave gives ag ood performance but her character for the most part isn't given much to do and seems mostly thrown in to give the audience eye candy and a famine presence.
Director Duccio Tessari is no stranger to the Spaghetti Western genre penning scripts for Leone's "Fistful of Dollars" as well as directing the popular "Ringo" duology with Guillano Gemma. By this time in his career he had a more light hearted approach to his films injecting plenty of comedy, such as the silly "Alive Preferably Dead" and the Bond spoof "Kiss Kiss Bang Bang". Even with his light touch some of the humor in "Don't Turn the Other Cheek" is forced, like it's saying "look at me, I'm funny". For the most part the humor does work well and is well balanced throughout the film.
"Don't Turn the Other Cheek!" may not work as well as Corbucci's more solid comedy politically charged "Companeros" or  Damiano Damiani's serious "A Bullet for the General" but was still a rollicking good time. The humor and the fantastic cast made "Don't Turn the Cheek" an entertaining watch and a must see for fans of the genre. The original American cut of the film butchered the final results by cutting out nearly 17 minutes of footage and creating plot holes big enough to drive a truck through.  Wild East Productions was gracious enough to release the film on DVD completely uncut with all the cut footage restored with English subtitles.

Written By Eric Reifschneider
Posted by Cronosmantas at 6:23 PM