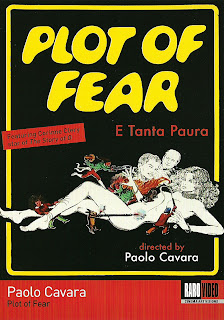 I had no idea what to expect when first getting ready to view "Plot of Fear". Was it a horror film, a drama, a Poliziotteschi? To my surprise it ended up being a giallo, but an atypical giallo as it doesn't follow the blue-prints first set forth by genre greats Mario Bava and Dario Argento.  Due to this it may alienate a few fans of the genre that live and breathe the Bava/Argento formula but for me it was a breath of fresh air making it a rather unique Italian film experience. 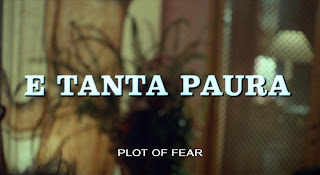 The audience gets a shock right away with a guy getting strangled to death by a dominatrix. After the opening credits another brutal killing occurs with a woman beat to death with a wrench on a public transit bus. Two violent killings this early in the film... what is this film going to turn into? Each killing has a picture cut out of a children's fairy tale book left at the crime scene and a detective finds that all the killings trace back to an upper class orgy party where a prostitute was accidently killed after having a heart attack when the host and party-goers playfully joked they were going to feed her to a pet tiger (?!?!). Things get a little more complicated when our detective gets involved with one of the women at the party and has to find the killer before she becomes the next stiff at the morgue.
Italian films are known for low budgets but the production value for "Plot of Fear" is quite lavish. Beautiful and colorful sets and locations highlighted gorgeous cinematography and lighting. Director Paolo Cavara, director of the wonderful giallo "The Black Belly of the Tarantula", knows what it takes to make a visual feast and loads the film with all the staples of Italian cinema with tantalizing shots, steamy sex scenes (including an orgy while watching a hilarious erotic cartoon), and brutal violence (including but not limited to burnings and car accidents).  His direction is aided by a unique flashback structure to the plot and by some talented cast members including genre actor John Steiner and Americans Tom Skerritt and Eli Wallach.
What plagues many gialli is the weak leading character and sadly "Plot of Fear" falls prey to this fault as our lead detective (Michele Placido) just isn't overly enthralling. At least this time the character is a detective instead of an average Joe solving the case outside without police involvement like every other giallo in the genre. The killer, for my taste, is also hinted at too early in the film and the score is a bizarre second rate acid rock score reminiscent of Gary Sherman's "Raw Meat".
Even with its few faults, "Plot of Fear" ends up being something a little different on the menu for fans of the genre and not just another clone of the Bava/Argento formula. You won't find any gloved and masked killers roaming the sets here but the interesting flashback structure, loads of steamy sex and other oddities (like a prostitute being scared to death by a pet tiger) is easily enough to make this well worth buying for Italian film buffs. The RaroVideo DVD release is amazing unleashing this rather rare giallo into the United States for the first time in gorgeous anamorphic widescreen and a load of special features. Also included is the original Italian track with subtitles for the purists and the English dub for those that prefer cheesy dubbing. Visit their website for more information or to purchase the disc.

Written By Eric Reifschneider
Posted by Cronosmantas at 7:37 PM