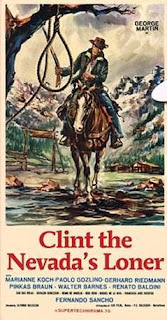 AKA "Clint the Stranger"

The title is an obvious reference to Clint Eastwood's infamous character in the "Man with No Name" trilogy but oddly enough "Clint the Stranger" (also known by its more awkward alternate moniker "Clint the Nevada's Loner") is as about as far removed from the stylistic approach of the of the Leone films as a Spaghetti Western can get. It may not take place in the sun blasted Almería deserts or contain scraggly anti-heroes but that alone doesn't make it a bad entry into the genre. On the contrary, "Clint the Stranger" is rather good but is sadly overlooked due to its drastically different style. 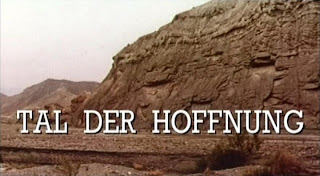 Clint (George Martin) is a gunslinger wanting to regain the love of his wife and child. After tracking them down to a secluded ranch, his wife says she will take him back only if he gives up his guns and violent ways for good. The problem is a local cattle ranch is threatening the lives of the local sod-busters so Clint will soon have to renege on his promise in order to save his family and neighbors.

Unlike Leone's blue-print for the genre, "Clint the Stranger" takes place in a lush green valley making for a truly beautiful location that contrasts Leone's hot, deadly deserts. The plot is also far less violent, obviously influenced by "Shane" with George Martin's Clint character being the polar opposite of Eastwood's 'no name' character by being an all around nice guy that goes out of his way to help others, even gritting his teeth while being branded a 'coward' in order to regain the love of his family.
Don't let all that detour you as there is still plenty for Spaghetti Western aficionados to love here. There is a well staged bar fight as well as some tense shootouts with great stunts. The villains are also egregious and are completely despicable thanks to the script delving more into their characterizations. These guys are true douche bags!
"Clint the Stranger" will not appeal to some Spaghetti Western fans due to its more traditional western approach and for the fact the plot is just an Italian version of "Shane". Hell I wasn't that big of a fan at first since it was so different than what I was used to from films in the genre. On second viewing it impressed me far more with its solid characters and acting as well as an immersing plot. I say give it a shot and the Wild East DVD is completely uncut for fans that are willing to try it. A sequel titled "The Return of Clint the Stranger" (confusingly titled "There's a Noose Waiting for You... Trinity" for American release) did follow a few years later with George Martin returning but it is essentially a remake and far less of a film.

Posted by Cronosmantas at 7:07 PM