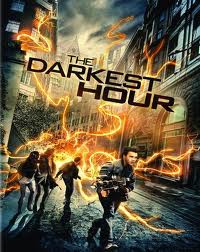 Truly artistic films rise above their genres to become something more. More mainstream entertaining films will try to blend genres instead, mashing together various elements in a desperate attempt to get as many people into the seats as possible. Sometimes it works, sometimes it doesn't. "The Darkest Hour" doesn't work. I really really doesn't work. In another attempt to bring a science fiction film mainstream, this collaborated American/Russian film rarely embraces its very cool concept and instead tries to spread it across a few other genres like action, horror, post apocalyptic drama...damn, it tries to be most things except comedy (at which it does try but fails). It spreads itself too thin and comes off as a two dimensional film tacked together with a thin script and thinner characters.

When on a business trip to Moscow, two friends and co-workers (Hirsch and Minghella) find themselves at a loss after being screwed over on their internet idea. They end up at a bar with two other American girls (Thirlby and Taylor) trying to move on from their smashed dreams. Turns out that their dreams are not the only thing smashed when a massive alien invasion rains down onto the city. Barely escaping the initial attack from invisible and electronically based life-forms, they have to figure a way to get out of the city alive...or risk dying in hiding.

As if two young American males happening to find two young American girls randomly in Russia seems far fetched to get us our cliche four heroes for the film, then don't even bother with the rest. Even though the idea of invisible and electronic life forms bringing some chaos and destruction down on any cool setting like Moscow strikes a note with me, "The Darkest Hour" pretty much does nothing to make that concept truly worth the watch. Beyond that, this film is about as by the numbers and poorly written as possible. It over explains some of its elements (the aliens are digging for nickel and conductive metals? How did you jump to that fucking conclusion from giant laser lights of twirling matter?!) and at other times it seems to throw things into the mix just to seem smarter than it is. The entire bus sequence seems stupidly long and the idea of microwave guns as a weapon against their armor (?!?) is about has half baked as possible. It's irritating at how it over explains some things and makes you make massive assumptions on others.

Also our characters are basic formulas of your basic heroes. The two guys are smart kids that have to find their tough men mentalities to protect our helpless and often irrational female leads. The jackass friend is predictably a dick and stupid and even the military folk later on seem to be caricatures of what might pass for real people. Half the time I felt offended by how unrelatable the cast was and some of the odd choices they make seem rash and only dominated by plot progression. The poor actors seem desperately intent on making the script and characters work and they simply can't keep up with the dreadful writing. It's like people racing each other on treadmills to the other side of the room. No matter how hard you work, you're going no where.

The one thing this had going for it was it's special effects. Seeing people evaporate into ash was awesome (silly, but awesome), but by the end of the film the effects seemed to be overabundant for its budget. The exploding aliens and their "vision" shots are generally kind of shoddy considering how cool the effects were to begin with. For a film that really needs cool visuals, "The Darkest Hour" is a mixed bag that doesn't work.

"The Darkest Hour" is far from being a truly atrocious film as it still has a fun concept and some of the special effects are pretty effective to begin with. Beyond that though, its a botched effort. Forced visual charisma can't save its abysmally written script and poor character handling. Even its attempts at blending action, drama, and science fiction feels completely fake. There are plenty of great movies that blend genres. It just so happens that "The Darkest Hour" is not one of them. In fact, I would easily compare it to "The Langoliers"...if not worse than that.

Written By Matt Reifschneider
Posted by DarkReif at 7:27 AM