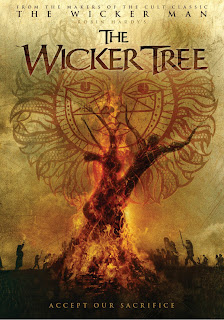 When I first heard that Robin Hardy was going to make a sequel to his celebrated 1973 cult classic "The Wicker Man" I first became very skeptical as any self respecting fan would. The original "Wicker Man" is a film I hold very close to my heart and one of my all time favorite films. It's been almost 40 years and sometimes good things are just better left alone and the dreadful 2006 remake helped prove the saying to be mostly true. The film actually feel from my thought process as it was going through development hell for a number of years and I was actually shocked to see it at a local store as a U.S. distributor finally picked it up. Curiosity got the best of me and though it doesn't come near the impact of "The Wicker Man", it actually wasn't entirely dreadful offering enough differences in plot and approach to make it worth a watch for fans.

The plot has a cowboy Christian couple from Texas (one being a famous country singer) heading to a remote Scottish island (that has been having missing persons epidemic for the last 40 years) in order to convert the Pagan heathens to see the light. People who have seen the original film (and god forbid it's shit remake) know the island's deadly secret and soon our quirky couple we find out there will be blood for sacrifice.
Hardy's approach to this sequel and spiritual successor is far more laid back with his tongue firmly placed in his cheek. Sure there are moments of creepiness but overall its far more of a satirical affair with plenty of black humor. Like the original there is still plenty bizarre eroticism to make viewers raise their eyebrows and keep interested. Christopher Lee, star of the original, makes a brief appearance but health problems kept him from having a larger role but Graham McTavish is evil enough to fill those large shoes as the intriguing leader of the pagans.
The major problem with "The Wicker Tree" is that it's pace moves up too fast lacking the subtle eerie build-up of the original. What's even more of a disappointment is that the tense, haunting ending everyone has come to expect is lacking and by the end the film peters out leaving the audience drained and thoroughly disappointed with the wrap-up.
The basics of the plot shares many similarities to "The Wicker Man" but the approach and tone is different enough to help it stand on its own and make it worth a watch for fans and the curious. Hardy again has created an entertaining picture looking into modern day Paganism and I dug the many moments of black humor, but the poor build-up to a less-than-stellar ending will ensure "The Wicker Tree" will always be condemned to wither in the shadow of the mighty "Wicker Man" and it isn't enough to wash away the bad memories of the Nick Cage remake, which ironically most people will probably think this is a sequel to.

Written By Eric Reifschneider
Posted by Cronosmantas at 7:31 PM