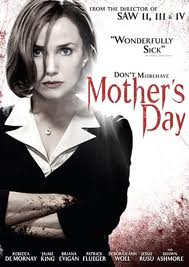 To be perfectly honest with all of you avid readers, I'm not a very good cult fan. I only say this because Troma films simply don't do it for me. I get the appeal, but the tongue in cheek low budget style never grabs me. Thusly I was one of the handful that didn't have a problem at all with a "Mother's Day" remake, particularly because I find Darren Lynn Bousman to be a rather impressive modern horror director. So here we are, one more remake down on the never-ending remake train and the result is an intense home invasion flick that modernizes its exploitation elements nicely while delivering some whopping performances.

When a bank robbery goes drastically wrong, a trio of brothers take shelter in their old house to escape the authorities and tend to the one brother who was shot. Little do they know, their old house was picked up off of a foreclosure and the party that the new home owners are throwing is going to give them a bit of a problem. This means mother (De Mornay) must be called upon to fix the situation.

Although home invasion horror/thrillers are a dime a dozen anymore, the scale in going about them has been heightened in the last few years. "The Last House On The Left" remake took the cheesy original story to new levels of artistic intensity and the Spanish film "Kidnapped" is one of the most intense films you will ever watch. Ever. Thusly, "Mother's Day" has a lot of very good competition. Despite some great moments and a stunningly well built cast, the film is just a cut under the previously mentioned gems.

I appreciate how simple "Mother's Day" is as a film. The concept is basic: robbers bust into the wrong house, guests must figure out a way to escape/survive, and shit repeatedly happens. Not all that original, but an effective formula nonetheless. What makes this film rock and roll are two things: the directing and the cast. Bousman earns his merit by giving the film a combined look of modern sleek camera work and old school exploitation elements. He loves to utilize the ensemble cast with lots of great banter and oddly memorable one liners and his intensity for violence is only hindered by a lacking budget (which is why I assume some of the death sequences aren't as extreme as he normally would take it) which tends to favor some odd placed CGI gore. He loves to throw the characters into some very extreme situations and it makes for a wild ride for the audience who continually thinks "What would I do in that situation?". This is easily heightened by a stellar cast of secondary genre regulars who all own their respective roles. Just look at the cast on IMDB and see how many other horror films you've seen them in, I'm sure it's quite a few.

The general casting is great, but its Rebecca De Mornay that really steals the film. Her balance of bat shit insane and sweet motherly caring makes for an ambitious villain role that pushes the film out of its cliche territory and into something a little more unique. The dynamic of the family is creepily effective at times and with her as a ring leader its hard not to cringe with how it all works.

Unfortunately, there are quite a few plot holes that drag the film down a bit. Some characters are left in the dust of pacing convenience and some of the more intense moments feel rather out of sync with the rest of the film. When you have a cast this size, some characters are simply not going to get the full arcs they need (the adulterous woman for example is there for progression only and when she kicks the bucket we could care less) and this film falls prey to that. It also pushes a few moments into areas that are seemingly out of place. Having one of our killers force two young men to kill one another at the ATM is an intense scene, but it rarely makes sense in the full spectrum. It's as if by the end of the movie, they needed to kill off a lot of characters and had to just throw in whatever to get it done. Some characters just up and disappear (has anyone seen Lydia after it would seem she's about to switch sides? No?) and it can be frustrating.

"Mother's Day" still remains head and tails above its originator in quality and execution. It has plenty of memorable moments to kick it up as a great modern horror film, but its lacking cohesion in character arcs/plot holes hinders it from matching the work done many other great home invasion flicks in the last handful of years.

Written By Matt Reifschneider
Posted by DarkReif at 1:18 PM