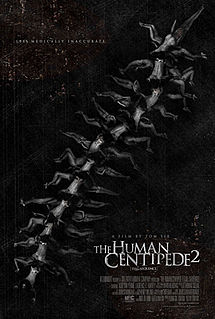 It's still hard to believe that "The Human Centipede" has such a cult following. Actually, it's not hard to believe. It's the kind of film ripe for that kind of dedicated cult status. I just happen to not consider myself part of that lucky bandwagon. Yet, the almost required sequel, "The Human Centipede 2 (Full Sequence)" compelled me back into the world of schlocky medical horrors with its rather unique spin on the formula and its artsy visuals. Unfortunately, this return to ass-to-mouth hell is rarely better than the original one and often comes off as snobby in its attempts at being artistic.

Martin (Harvey) has become obsessed. He watches the film "Human Centipede" over and over again while fantasizing about making it his own reality. When opportunity affords him to be able to accomplish his dream of creating the ultimate 12 person human centipede by kidnapping unknowing victims in the parking garage he works at, Martin spirals down into a madness where his fantasy about the film overrides a life that never understood him.

The oddity that "Human Centipede 2" takes place outside of the realm of the original film is almost as clever as the film sells it. Perhaps not all that original that a film would self-reference its previous entry as a film (see the "Scream" sequels and the vastly superior "Wes Craven's New Nightmare"), but it's a paradox that occasionally works. Including one of the actresses from the first one playing herself and his book crafted from artwork and articles about the film is clever. Other times though, it simply feels as though director/writer Tom Six is just prodding his own ego by believing his film is far more than it is. This is, however, the one aspect that does overly work in the film and takes the franchise in a unique and less treaded path even if it doesn't always succeed at selling it as well as we've seen it done before.

Beyond this intriguing direction, "Human Centipede 2" tends to be insanely predictable as a horror film. It proceeds in a by-the-numbers manner as we are introduced to our protagonist/antagonist Martin (who speaks not a word in the entire film on a side note - a ballsy move) and his awful existence where he is treaded on in all the cliche ways by an overbearing mother and abrasive people around him. It's all hum drum as it proceeds to get stranger and stranger, more nightmarish if you will, until it cascades into the second half. This half is an all out torture fest of gross out gags and irrelevant violence where it completely loses its story and randomly throws in details that seem asinine. It gets so ridiculous that it almost becomes a joke. Scenes of rape, torture, and a disturbing birth...oh yes a birth...are bombarded on the viewer while the film forgoes any of its artistic merit (with its black and white visual style and speechless main character) to fall straight into exploitation territory.

"Human Centipede 2", like the original, is a film that works on a gimmick. Sometimes the gimmick sells, thanks here to a very creepy lead performance, but more often than not its un-consumable exploitation that plays off on just trying to get the audience to cringe and gag in a gore filled hurricane finale rather than staying with its story. Fans of the original are sure to love it for its cheesy writing and focus on extremes, but as for a smart and well made horror film...this sequence is far from full.

Written By Matt Reifschneider
Posted by DarkReif at 7:10 PM