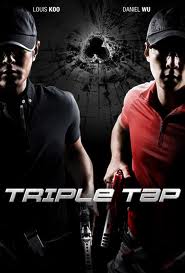 Cop dramas can be a rather boring genre. They're a dime a dozen in the industry and television has practically destroyed them from being original in most ways. Luckily, Blood Brothers has a distinct distaste for TV with their convoluted programing and thusly films like "Triple Tap" still work. Hardly a film to redefine the police centered action/drama, the stylistic and engaging "Triple Tap" is a nerve wrecking film. Don't be deceived by its almost John Woo inspired synopsis below though, its more detective drama than action.

After a grueling duel at the gun range to take the top spot as best sharp shooter, Officer Jerry Chong (Wu) and investor Ken Kwan (Koo) become quick competitors. Their respect for each other's skills though creates a competitive friendship. This makes it tough when Ken stumbles across an armored car robbery in progress and takes matters into his own hands by gunning down the murdering thieves. Now Jerry's instinct tells him there is far more to Ken and this situation then what's on display...but will their history interfere with the spectacular game of cat and mouse that will ensue?

My expectations for "Triple Tap" were shattered both in good and bad ways by the time the credits rolled. As I mentioned in the opening paragraph this film very much looks and was promoted as an action film, but really is not. Although it kicks off with an intense gun competition and a shoot out on a freeway, beyond that it focuses more on the detective work and the characters only teasing us with some more intense moments later on. Initially, the film very much takes on a gun-fu John Woo feeling for its first act - punctuating itself with stylistic gun play and artistic visuals courtesy of director Derek Yee (you know that guy that gave us the awesome "Shinjuku Incident"?). After that though, its all dialogue and drama, so don't go into it expecting more gun-fu.

Although the lacking action set pieces might underwhelm beyond its first act (even the finale is all about tension and suspense rather than bullets), the film does succeed up and above on its character development and execution for its detective portion. Both Koo and Wu give stellar performances in the film - they worked together on "Protege" too - that warrant the time they eat up on screen with vigor. The twist is not as hidden as one would think despite some valiant efforts to keep one guessing, but the fact that both of our leads make us care about their situations elevates it above this flaw. It ends on a rather odd note though negating some of the realism that was balanced earlier, but "Triple Tap" certainly accomplishes it's goals.

"Triple Tap" might not be the most original film about police and crime dramas, but the film takes some chancy maneuvers with its focuses and delivers impactful results destined to make this a sleeper critical success. It has a stunning cast and a truly inspired director and these things allow the film to leap its faulty script in many instances. Not quite what I expected from this highly toted film, but "Triple Tap" is surprisingly effective in how it goes about itself.

Written By Matt Reifschneider
Posted by DarkReif at 5:09 PM