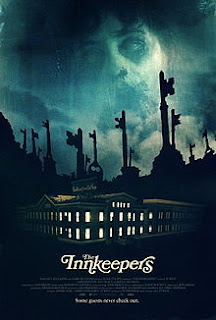 With "The House Of The Devil" under his belt in all of its 80s glory, Ti West's next project is of a similar taste albeit more modern in its look than the above mentioned gem. "The Innkeepers" crafts another film thick with suffocating atmosphere, long winding shots, and minimal deviations from the premise. This time around he throws a bit of a modern spin on it and gives a clever combination of old and new styles to make "The Innkeepers" a statement that doesn't rely on retro aspects.

Claire (Paxton) and Luke (Healy) are the last two employees as the failing Yankee Pedler Inn. Although its a beautiful and historically set place for a few stragglers to rest their weary heads, lacking business has lead it to close after the weekend. This just makes Luke and Claire's attempts at grabbing proof of the ghost in the Inn more imperative. With only a handful of guests and the two of them running the ship, they decide to push the ghost of a suicidal woman from decades ago into action. The action they receive isn't quite the proof they were so desperate for.

Whether you want to admit it or not, in all honesty, it's very easy to see why so many individuals thought "The Innkeepers" was boring. Just like with "House Of The Devil", Ti West's style is that of the slow burning, tension building, atmosphere dense variety. This isn't your average modern ghost tale for sure and his use of long shots that focus on mood will have some people on the verge of tears in boredom. Even I found myself once or twice wondering what the point was after a few measly jump scares and the massive amounts of character building. West takes his sweet time with the modern and witty dialogue to build tension, atmosphere, and characters and many folk will find this unnecessary.

West saves the film from dragging by creating a beautiful film. His Kubrickian style of script building and camera work heavily resembles the classic "The Shining" at times and he creates such a real universe for the story and characters to exist in that it was hard to shake when the credits began to roll. The Inn becomes this other character with its own personality and the way he builds up to a the simple scare of a piano key being pressed down is truly the art of horror. He makes you completely dread the fact that its going to happen even though you already know its going to happen. The ability to craft this kind of atmosphere is a rare trait and Ti West glorifies it on "The Innkeepers".

All of this slow burn also gives under a fantastic pay off. With the two fantastic actors in our lead roles (the focus falls on Paxton who has become quite the little scream queen in the last handful of years with "Last House On The Left" and "Shark Night" coming to the top of my head), West is able to work it out and give the finale a real punch. Creepy, frightening, intense. The final fifteen minutes will have you shaking in your boots. It's not all that original of an ending and it throws a final twist that is fairly obvious (but does leave the audience thinking for a little bit), but the execution is phenomenal.

Horror fans will not find "The Innkeepers" as a film that blows the ghost genre out of the water. It really doesn't as it follows most of the usual formulas for going about the ordeal, but the execution of the film on screen and behind the camera is damn near flawless. West owns the film with his dense atmosphere and great characters and the visual style of the film is old school flattery for its leads and setting. "The Innkeepers" might not be new news for horror residents, but its sure to please long standing fans.

Written By Matt Reifschneider
Posted by DarkReif at 8:58 PM