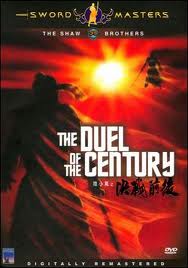 My preferences within the Shaw Brothers domain had always settled on great kung fu hand to hand combat with lots of ridiculous characters and set ups (i.e. Chang Cheh and Kar Lau Leung). The truth of the matter remains that most of the best Shaw Brothers martial arts films rest in the sword epics. Thusly when the opportunity came to review the highly toted "The Duel Of The Century", you're damn right Blood Brothers was there to take it. Although the film can be a mixed bag of elements and execution, it remains a charming and thoughtful film that grabs its viewer.

When a duel between two of the greatest swordsmen in the land is announced, Lu Xiaofeng (Tony Liu) finds the whole thing odd and out of character for the two great celebrities. His friendship with both leads him to delve into why the duel was called to begin with and the purposes of such a public fiasco. His detective work uncovers a larger conspiracy within that may topple the entire country and only he can stop it before it's too late.

For the first half hour of "The Duel Of The Century" I was completely clueless. It slams you with a slew of characters and events in rapid succession and constantly I felt as if I was missing something very important. Turns out this film is actually a sequel to "Clan Of Amazons" where I assume they give more explanation to characters involved in this film. "Clan Of Amazons" is not available in the US so don't bother. Just take the brushed over characters with some salt and do like we did, move on and go for the throat of the plot.

The plot is where "Duel" really picks up. The characters are often cheesy, over painted with vague details (even our hero doesn't have a real motive to dig into why the duel is happening at first...perhaps he's bored?), and fantastical in certain ways like our hero has the ability to grab the sharpest blade with his bare hand for example. Thusly, the film has to win us over with its plot, which it does quite ably. The detective elements almost give the film a Sherlock Holmes like style where he travels from person to person asking questions (often getting into ridiculous amounts of assassination attempts and fights) and the viewer has to put together all the pieces of the puzzle with him. This makes the film very intriguing as we begin to watch it all unfold in front of us. The plot and how it all works is definitely the highlight of the film.

Beyond its clever onion-like peeling of clues, the film also works its charm. Like many Shaw films from the 80s it likes to blend genres a bit too much thrusting vibrant colors and odd settings at the viewer to give it a more epic feel. The action is often quite over the top (fire breathing attackers with candles?) and it loves to do some strange artistic and fantasy inspired things with it. Our final duel does some odd visual things to give it an epic feel as our swordsman literally defy gravity and logic with their abilities and the film utilizes these elements through and through. Director Chor Yuen loves to toy with angels and visual flair and it helps keep the film going despite some of its dialog heavy moments. This upped pacing and relentless assassination attempts keep the movement brisk and adds to the charisma of its 80s visuals.

"The Duel Of The Century" is cheesy and lacks some of the darker elements that make these sword fighting epics so good. While our lead character is fun, he lacks his own character arc to really kick it to the next level too. The visuals of the film are fantastically fun and the plot is cleverly paced and developed...and that's what makes this film as good as it is despite the above mentioned flaws. It's not one of the best, but its a great addition to any Shaw Brothers/martial arts fan's collection. Blood Brother approved!

Written By Matt Reifschneider
Posted by DarkReif at 5:59 PM