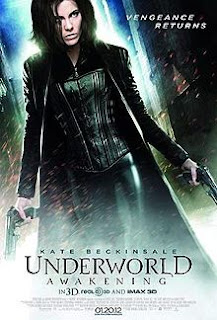 If one is up to date on the Underworld franchise and how it works, then Underworld: Awakening is going to certainly strike that special spot for those looking for sleek action packed vampire/werewolf throw downs. If you are not familiar with the style of the films (catch up with our reviews for Underworld, Evolution, and Rise Of The Lycans), then let the eye rolling commence. This fourth entry is easily the weakest in its writing (which is saying quite a bit) with little added to the characters and less added to the mythos of the franchise. It also happens to be the most exciting, instead focusing on creating dynamic action set pieces and setting up a new era for our vampire heroin to kick ass in. It's a trade off that makes for a weak entry, but one that entertains the shit out of you anyway.

Selene (Beckinsale) has been witness to a turning of the tides. After the upheaval in the vampire ranks and thwarting a world ending collaboration between the two founding brothers behind the monstrous races, humans have finally discovered their existence and look to purge the world of these creatures. After being captured and held for a dozen years, Selene awakens in a different world. One where vampires and Lycans still duke it out, but in the wake of the human's fear. She is freed by the mysterious Subject 2 (Eisley) and looks to figure out why her connection with this escaped subject seems so close.

Believe it or not, that little paragraph above is about half of the actual plot to Awakening. It spends longer on getting us to the 'future' then it does actually giving us plot to toy with when we are there. It also is a bit awkward at unveiling the story. Why it spends so much time getting Selene captured in the intro with LOTS of killing and flame throwers to go about it, is beyond me. Personally, it would have benefited the film more to kick us straight into the future and let the tale of how her and her hybrid werewolf/vamp lover Michael split unfold in dialogue and some cleverly placed flashbacks. As is, the film follows a more standard structure and suffers a bit from it.

Once we are to the main plot, it seems even more barren than the extensive narration to get us there. Rarely does Awakening add anything to the mythos of vampire and lycan history and the hybrid plot (which is once again front and center) is brushed over lightly. Even the 'missing Michael' aspect is underdeveloped which gives our heroine Selene almost no character arc beyond the norm. I bitched about the underdeveloped love story before in this series and I'm going to really bitch here about it as it's almost completely blown over. Even though Evolution rarely made sense and added needless complexities to its awkward plot, at least it added depth to the franchise with its mythos. Awakening adds almost nothing past a few twists that are poorly explained and never make sense with Subject 2 and the group that held Selene for experimentation.

What this fourth film does do well, and it does it B-grade stupid well, is piles on style and action. Although directors Marlind and Stein rarely push this film to the limits (beating Len Wiseman at his own game shouldn't be hard to do, but they don't), they know what they do well and they bring it in spades. Tons of slow motion death sequences, gun battles, leaps from sky scrapers and down elevator shafts, car chases with massive wrecks, lycan on vampire biting, vampire on lycan biting, and a finale with the biggest fucking werewolf I have ever seen (doesn't make sense, but it's there) make Awakening easily the most action packed and well choreographed film of the series yet. It's brutally violent with gore and Selene seems desperate to simply kill everything. For a popcorn flick, Awakening is top notch in this area and for cult fans its a blast. Nothing says laughing and getting excited than watching a little girl tear a werewolf in half the long way.

Awakening is simply a mixed effort. Yes, it's more than enjoyable with its massive action pieces and less gothic designs, but it lacks any kind of story or characters to really make us care about what's going on. It's disappointing that this film doesn't add to the mythos, but take what you can get and enjoy it for what it is: two crazy monsters tearing things apart.

Written By Matt Reifschneider
Posted by DarkReif at 4:42 PM