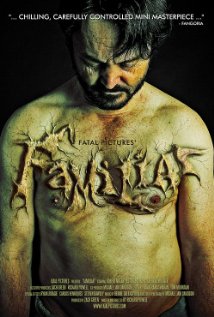 Fatal Pictures brought the short film "Worm" to Blood Brothers for review quite some time ago and the surprise that it held in its short run time of tense inner turmoil was impressive to say the least. So its not so surprising that the follow up film from producer Zach Green and writer/director Richard Powell would follow in a similar tradition, but this time taking the psychological aspects and morphing them into a fully "fleshed" out horror experience.

John Dodd (Nolan) has been having some serious thoughts lately. His wife has been grating on his nerves with the mundane modern life and his daughter is finally ready to head off to college and the timing seems right for him to finally do things for himself. These serious thoughts have become blacker and blacker lately though and they're starting to seem like another person is in his head that is pushing him to do some drastic things to free himself. It's time to decide who is really calling the shots though when the thoughts take it too far and the results he finds may leave him scarred for the rest of his life.

"Familiar" builds the audience with it's lead and his internal thoughts. His psyche seems buried in savagery as he desperately clings onto whatever he can to find himself. The slow burn of the first half of the film is punctuated by a super strong performance from Nolan who's ability to stare at a camera adds unique nuances to the film's slow moving and tense psychological build thanks to some great atmosphere of its writing and directing. Although the supporting cast is limited with their time on screen, they're strong and massively supportive of the overall aura of "Familiar". This combination of Powell's ability to craft thick atmosphere and strong performances gives the heavily narrated film enough energy to lock it's audience in tight.

Then the film takes a drastic Cronenbergian twist for its final act, thrusting Dodd and his increasingly torn mentality straight into the horror grinder. Not to give too much away for those intrigued to see the film, the "voice" in his head begins to manifest itself in physical ways onto the character - pushing the film into that territory of physical grotesqueness that blends with the psychological horror beautifully. This is all done with some top of the line special effects (seriously some of the best I've seen in the handful of short films I've seen throughout my time as a writer here at Blood Brothers) that are guaranteed to make a few squeamish with it's results.

"Familiar" is very similar to Fatal Pictures' "Worm" in the first portion of the film, but its the twisted finale that ultimately sold this reviewer on the entire experience. It's a stunningly crafted and gorgeous independent film that works the nerves in some truly horrifying ways playing on expectations and against the grain for better effect. Highly recommended for fans of horror that can get their hands on seeing the film. Blood Brothers approved!

Written By Matt Reifschneider
Posted by DarkReif at 2:13 PM