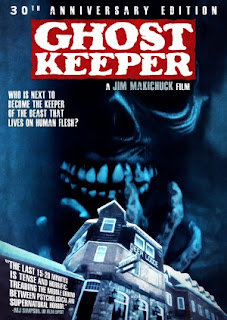 During the late 70s and early 80s there was a tax shelter in Canada for filmmakers and with the promise that all money spent on filmmaking could be written off come tax time, movie making began to bloom as investers were looking for ways to liquidate their assets. What's the easiest type of film to market and make a profit? The horror film of course so a surge of Canadian horror films began to fill theaters and up until the recent DVD release from Code Red, one of the most obscure of these Canuck films to locate was the eerie  "Ghostkeeper". After all these years was the film reel worth dusting off? Lets pop in this bad boy and see. 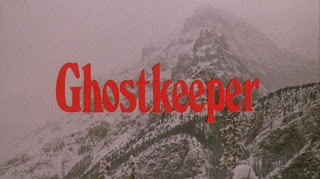 We open with a couple with a rocky relationship and their slutty friend snowmobiling through the Rocky Mountains when they come upon an old abandoned hotel. They are forced to take shelter due to a blizzard (which they were warned about... dumbasses) and find the hotel is inhabited by a creepy old hag, a bitch that doesn't like to answer questions and keeps warning that she has some children roaming around somewhere. Predictably one of the characters disappears and the other two are on the fight for their lives as they discover the grisly secret kept in the basement.
At first glance "Ghostkeeper" can be seen as cheaper Canadian clone of "The Shining" mixed with a heavy dose of "The Sentinel", but this is not an entirely fair assessment. Sure there are many ties one can gather between the three films, like the snowbound hotel setting and the sentinel-like guardianship angle, but the filmmakers tried to do something different with the film, like introducing the native American legend human eating legend of Wendigo.
In praise of the film I have to say the filmmakers succeed in creating an ominous, creepy atmosphere aided by the isolated setting and natural lighting. However the plot is unfocused and the dialogue is for the most part clunky, but a scene did crack me up when one of the characters talks about being a hooker and seducing a substitute teacher. The whole Wendigo aspect of the plot seems to be shoehorned in with not much revealed about the creature and the mythology behind it.
I wanted to like "Ghostkeeper" more than I did but the slow burning plot builds to an ending that wasn't worth the wait.  The gloomy setting and eerie atmosphere still makes it worth a watch for horror fans but don't expect ample amounts of gore and nudity that accompanied most of the horror market at the time. "Ghostkeeper" leans more towards the classy, spooky side of the horror genre and it's a damn shame it didn't have a stronger plot to make this the lost classic it was made out to be my many horror fans. The Code Red DVD is terrific and the best this obscure movie is ever going to look. It's limited to 500 units so if your a collector then you better order fast!

Written By Eric Reifschneider
Posted by Cronosmantas at 8:47 PM