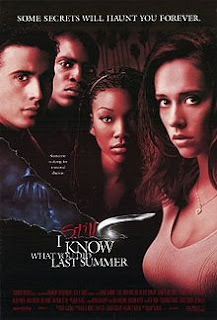 Here at Blood Brothers we pride ourselves at being 'unapologetically cult' and keeping that in mind I'm going to say this to you, oh faithful readers..."I Still Know What You Did Last Summer" is more enjoyable than the first one. I know, crazy, right? The first one pretty obviously sucked as a watered down modern slasher with no kills and less thrills, but this sequel has three things going for it that make it more enjoyable (not better, but more enjoyable): its got a better setting, Jeffrey Combs, and an actual body count that's worthy of a slasher film. Generally speaking, "Still" lacks characters, acting, direction, logic, and an urgency to push the limits of creativity...but hey, its got a few things going for it.

Julie (Hewitt) and boyfriend Ray (Prinze Jr.) have been having a few relationship troubles lately. Julie keeps having dreams about the fisherman killer Ben Willis and a new friend Will (Watson) seems to want to be as close to her as possible. When her roommate and best friend Karla (Brandy) wins free tickets to the Bahamas for a brief vacation, Julie and company seem set on a killer weekend. With emphasis on killer. It seems like Ben Willis with hook in tow has shown up on the island and the wild storm that's bursting outside is going to keep them there...can Julie survive the ordeal again?

While the first "I Know What You Did Last Summer" film lacked in all areas as a slasher and horror film, "Still" does rack up a few points in knowing what it is and going with it. It's a slasher film folks, so give us some slashering! It does. The body count is way higher, the kills are far more brutal (although still tame enough to garner the larger mainstream audience it was gunning for), and the setting of an empty island hotel is solid enough to match the killer hook fisherman villain idea. For this, I enjoy "Still" much better than the original one.

Past that though, "Still" is about as generic as it gets. Our actresses and actors still wrack the nerves (a surprise heartwarming appearance by Jeffrey Combs is almost negated by an uncredited and awful performance by Jack Black), the characters are about as flat and unmotivated as ever, and the plot progression could have been mapped out by any self respecting horror fan in the first ten minutes. Lots of pseudo-scares plague the first act with silliness and by the time we get to the cool setting they have to kill off everyone at lightning speed (with some very unoriginal kills might I add) so the moments of terror are lost in the pacing. It barrels down into more watered down modern slasher drivel...making the better elements seem trivial in the end.

No "Still" doesn't warrant a better score than the original, but by being worse its almost better. At least I had a few good laughs at this one rather than scratching my head in disbelief at the original. It rarely makes sense, the acting does nothing to right the script flaws, and its by the numbers plot fails to ignite the slasher imagination. It does have Jeffrey Combs in it and a better body count. That stands for something in the slasher world, right?

Written By Matt Reifschneider
Posted by DarkReif at 10:47 PM