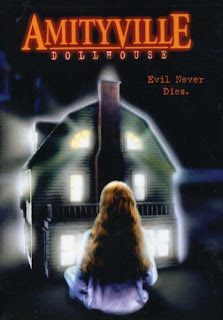 Even as a kid seeing "Amityville: Dollhouse" on the rental shelves I knew it was a desperate attempt at continuing the overlong, dying haunted house franchise. I mean really, a fucking dollhouse? After all these years and finally seeing this eighth and final Amityville film into the original franchise run, my original inclination was correct... it sucks.

Like Amityville 4,6 and 7, the plot here is concerned with yet ANOTHER cursed item from the Amityville house. Seriously there are more entries in the series about cursed objects as there are plots that actually take place in the notorious haunted house itself! Like the original film, the story follows a blended family as they move into their newly built dream home. All goes well until they discover a dusty dollhouse in a dilapidated shed. The dollhouse is of course a scaled down model the world's most famous ghost house and it predictably it causes all sorts of ghostly shenanigans.

Out of all the Amityville films this is by far the most hokey and convoluted. Seriously there is so much shit going on here one will have trouble following what the hell is happening. Our father has clairvoyant bad dreams, our mother has sexual thoughts of her step son, our aunt and uncle are occultists who are desperately attempting to save the family and to top it off our youngest son is seeing images of his dead father as a corpse. Mix that with giant rats under the bed, dead wasps crawling into ears and fireplaces that are doorways to alternate dimensions with demons and you have diarrhea that is as explosive as "House II: The Second Story."

The plot is also full of plot holes big enough to drive a moving truck through. How did the this cursed Amityville dollhouse end up in this shed? The film explains that the father built this new house on the old foundation of a house that burned down. Does this mean he built it on the ruins of the old Amityville house? This still makes no sense as the setting is obviously the southern California desert and NOT East Coast New York. Absolutely nothing is explained and no mention of the previous murders or haunting at Amityville are mentioned.

Director Steve White obviously had a hard-on for the cursed Amityville object plot device as he also served as producer on Amityville 4, 6 and 7. The result of "Amityville 8" proves he should stay out of the director's chair as he seems to have no handle on the bumbled plot and gives the film a forgettable, flat look about it.

"Amityville: Dollhouse" lives up to its ridiculous title as it is a silly, hokey and downright lame horror film and easily the worst of the franchise next to "The Amityville Curse". The directing is flat and the story has far too many subplots for its own good. The simple idea of a haunted dollhouse is laughable and proves the series had nowhere to go and rightfully marked the end of the original franchise run as the original "Amityville Horror" would be remade in 2005.

Written By Eric Reifschneider
Posted by Cronosmantas at 6:53 PM