Detective Dee And The Mystery Of Phantom Flame (2011) 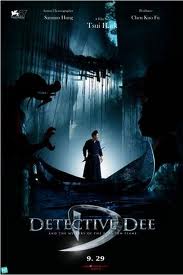 My expectations for "Detective Dee And The Mystery Of The Phantom Flame" were slightly, you know, sky high. Just look at the names attached to this martial arts detailed Chinese version of "Sherlock Holmes"! Directed by Tsui Hark. Starring Andy Lau. Choreographed by Sammo Hung. This film should easily be one of the best of the year. That is why it hurts me so to write this review. Let's just say that it's slightly disappointing. It's still quite a bit of fun and the potential for the character Dee and this franchise is very intriguing, yet the film comes off as too rushed and awkward for its own good.

With the upcoming coronation for the empress of China and the finishing touches of a 66 meter high stature of Buddha in the timeline, the sudden spontaneous combustion of a few officials as stirred a fright into everyone. A hidden assassins' plans and the decree of a spiritual guide prompts the Empress to release the very intense and well trained Detective Dee from prison to solve the case. Can Dee do the unthinkable and unweave the massive mystery to find out the assassin's intents before more people die in the phantom flame?

The concept of "Mystery Of The Phantom Flame" is excellent. A martial arts laden version of a Sherlock Holmes tale? Fucking count me in! The martial arts stunts are well coordinated and exciting. The vision and spectacle is something to be admired too with its wicked fast pacing, larger than life plot of twisted betrayal, and the over the top characters. Detective Dee is the perfect protagonist to build a kick ass franchise around and even the side characters are great unique figures. With the charming and often quirky style of Tsui Hark at the helm, this is the best part of "Mystery Of The Phantom Flame".

The big issue with this franchise kick off is just how quirky it gets. Yeah, the spectacle is larger than life with characters that are even bigger, but even then the movie loves to really throw in some loops and curve balls. Random puppet enemies, villains with magical abilities, acupuncture needles that can change the structure of your face, and to top it all off - magical fighting/talking deer. It's these fantastical elements (which arrive very often) bleed into all elements of the movie whether its the amount of arrows that flow from the sky, the leaping finale, or the magical weapon Dee wields that sort of hurt the true detective story in the film. It's as if Dee's logical use of brain power is secondary to the over the top antics and it just doesn't sit well.

"Detective Dee" is still a fun film that really piles on the ridiculousness and in a way its still a great way to kick off this franchise. It's also too far out there for its own good half the time with much of Sammo Hung's choreography wasted on wires and Andy Lau's awesome character wasted in the latter half of the movie, but its fun. That counts for something right?

Think this awesomely stylish version of Sherlock Holmes is right for you? Click the link below to purchase while contributing to Blood Brothers at the same time!!
Posted by DarkReif at 11:43 PM