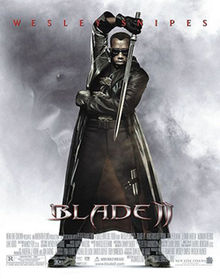 Now I know this might raise a few eyebrows from our dedicated readers at Blood Brothers, but here it goes: "Blade II" is more enjoyable and better than "Blade". Technically, I'm going to give it the same rating as I did the first film, but that's simply because this still isn't a perfect film. It still inches it out and works better than the first one. I know I already hear some blasphemous uproars from those reading this, but finish the review first and leave a comment below.

Blade (Snipes) has been desperately tracking down Whistler (Kristofferson) since his capture. He's had to take one a new tech man in his stead in the form of the rascally Scud (Reedus) and its been a quest. Although things look up when they finally retrieve their fallen friend from the vampire hands, but an odd request for a truce from the vampire king sets him on edge. As it would seem, a new breed of vampire has arisen and the strain stems from a monster named Nomok (Goss) and his intent is to eradicate both vampires and humans. Now Blade will have to team up with some of the vampires best hunters to find and end this apocalyptic new threat...

At its foundations, "Blade II" is a ambitious and violent fun action film. It blends a little more horror into the mix (with this split face monsters) and certainly jacks up the ridiculousness of the franchise to 11. This of course can be undercut by a rather hit or miss script from Goyer (who also wrote the first one) with how many random twists he forces into its plot progression and the lack of character development for many of the supporting cast, including an ill fated and awkward almost romantic subplot. In this sense, "Blade II" is a weaker entry despite its more comic book like tone.

This 'issue' for the film is ably brushed over though by a very strong cast and the stylish vision of director Guillermo Del Toro. Snipes once again snarls and cold heartedly wins over in the lead role, where the script and Del Toro finally utilize his fighting abilities on screen properly. This is only strengthened by a stellar supporting cast including Del Toro regulars Perlman and Luke Goss as villains in the film who own their roles with vigor. Del Toro's over the top style handles the ridiculous script with ease (and despite some odd CGI moments) really focuses down on making the action of the film - and all its glorious fist/sword fights - the real winner here. Partnered with a new sense of added atmosphere and horror, the directing of this film makes its awkward script a mere afterthought of flaws instead of the major plot holes it could have been.

Although its hard for me to give it more than a score of four due to its scripting and plot faults, the enjoyment I get from "Blade II" is a pure five out of five. It's a romp of a ride that hits all of the comic book overtones and action sequences with flair and high execution on screen. The strong cast (including a throw away role for action superstar Donnie Yen) gives life to some rather bland characters and Del Toro owns it with his style. It makes for a stupendous sequel that squeaks past the original.

Written By Matt Reifschneider
Posted by DarkReif at 11:26 PM