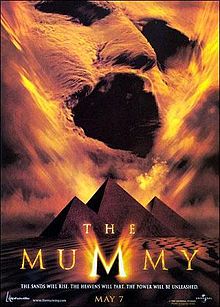 You know what's better than a B-grade action film? A B-grade action film with a huge fucking budget. Particularly when its a film that seemingly embraces all of its cheesiness into the fold and runs with it at 100 miles per hour. This is why Universal's "The Mummy" remake is all sorts of goody action fun. Not only is it a massively epic big budget action blockbuster, but it has the heart of one of those knock-on-the-jaw B-grade action films. This combination makes for a film that has a ton of genre nuances in a film that's obviously crafted for a mainstream audience.

When a young Egyptologist Evelyn (Weisz) comes across an ancient artifact via her brother (Hannah), she has to enlist the help of gun for hire O'Connell (Fraser) to lead her to a mythical city of ancient lore. As the trio of adventurers will soon discover though, this city is cursed with an ancient and very pissed off mummy Imhotep (Vosloo) who will stop at nothing to regain his strength and bring back his bride...even if he has to bring the world to an end.

It's easy to call "The Mummy" an "Indiana Jones" knock off because, quite frankly, it is. Losing many of the Gothic tendencies of the original Universal monster film from the 30s, this version updates the tale of ancient Egyptian evil with loads of one-liners, goofy characters, and extensive special effect riddled action sequences. It's a blast to watch. Stephen Sommers ably handles the mix giving his solid cast enough time (and timing) to sell its cheesy humor utilizing Fraser's abilities to be tough and funny at the same time. Fraser is also backed by a great supporting cast (including Sommer favorite O'Connor) that build on its rather humorous frame.

The film is also packed to the gills with action. You name it...its in there. You get massive gun fights, sword fights, fist fights, mobs, zombie mummies, running from man eating bugs, collapsing buildings, and a plane chase through a sand storm. Sommers (and a big bank roll) packs it in here and despite far too much CGI plaguing the multitude of plagues on screen, its a great rush of action to keep those who don't find the humor glued to the screen.

"The Mummy" is one of those films where the term 'good' needs to be used loosely. It's fairly formulaic with its character progressions and its ass-over-teapot cheesiness. Really though, its the B-grade action movie formula that makes this such a blast to watch. It's funny, exciting, and more often than not successful at blending the two. This makes it a remake worth watching.