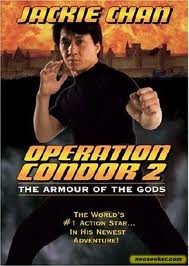 *Note: This is a review for the American cut of this film.

As if Miramax and American audiences didn't have enough of a hard time finding Jackie Chan films, this daftly titled "sequel" to "Operation Condor" is actually the first of the two films and features a younger and more ridiculous Chan. Once again the film sells itself with some of the most ambitious stunts and fight scenes in modern action films that highlight its often inept script. If not for these moments, this Indiana Jones knock off probably isn't worth much of its weight in film.

The Asian Hawk Jackie Chan (Chan...oh wait, you didn't get that with his name once again being his real name?) has recently recovered a piece of the fabled Armor Of God to auction off. This somewhat infuriates a Satanic cult who then kidnap his ex-girlfriend, from his days as a singer in a rock group, to bribe him to bring them the rest of the armor so that they can destroy it and gain immense power. Now Chan must team up with his old nemesis Alan (Tam) and current boyfriend to the ex-girlfriend to find the Satanic cult, save the damsel in distress, and somehow survive.

The plot for "Operation Condor 2" is utterly bat shit crazy. Satanic cult? Cheesy rock band drama history? The ugliest Mitsubishi car that has an escape scooter built in? If it wasn't for Chan's rather charismatic on screen presence and the (also bat shit crazy) action packed final act, this film might have passed for a Cannon feature. It's that over the top and silly. Our actors are predictably and often inept in their attempts to sell the characters as more than 2D representations of "real people" (with one of the worst accents known to dubbing for Alan), the humor is massively hit or miss, and the dramatic elements are forced and awkward. The film is insanely cheesy and rarely makes sense.

That's okay though, because "Operation Condor 2" also features one of Chan's best action finales. This makes up for a LOT of the asinine plot that we have to sit through. Does the ending really make sense? No, but its fucking awesome. We get leather-clad, high heeled assassin women, robed Satanic cult members who all seemingly know kung fu, and a dynamite vested Chan all doing battle in a cave like monastery (of really poorly built sets). The finale seemingly lasts forever and unlike the first three-quarters of the film, it keeps you glued to the TV with jaw nicely nestled on the floor with its stunt work. This film single handedly gets a couple of points just for this sequence.

In the end, its your basic Jackie Chan vehicle that benefits from his charm and stunts. The script and humor can be some of his worst that has reached the US yet, but fans of the Chan man are going to eat up some of its high flying sequences. Definitely not his best though.