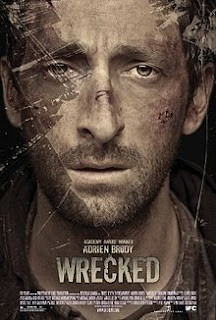 In all honesty, the concept of "Wrecked" is what caught my attention. Although IFC Midnight has released some stellar films (and some less than stellar films too), it wasn't the fact that Academy Award winner Adrien Brody was in it that made me interested. It was the fact that he was basically the only one in it. Throw in a few words about bank robbery, amnesia, and mountain lions and I suppose the genre fan in me kind of had to see it. Of course the film maker in me respects this film in many ways, but if I was to be truthful to all ye readers in interwebz land I would also admit that "Wrecked" is straight up boring too.

A confused man (Brody) awakens to find himself trapped in a wrecked car that had careened off of a cliff. His leg is trapped and broken and he has no recollection of anything prior to the event...the events, who the dead body is in the back seat, not even who he is. As he tries to free himself from this awful situation he begins to discover some of the reasons he is down in the ravine... and the indications that he and some pals just robbed a bank might make him not want to remember at all.

The formula here is simple. It's a one man memory mystery that's done to the setting of a man vs nature survival flick. There is relatively no dialogue (sans some between himself, a dog, and a vision of a woman), the settings are minimal to the forested and rocky area, and film focuses on being very subtle with its plot progressions. As I mentioned, the intriguing aspects of this film are rooted in this. It's a fascinating idea with its low key use of score or the very limited dialogue for us to get to know our lead character. It allows Brody to really dig into the character and give us the moments (via some solid directing) where a person's humanity surfaces through extreme circumstance. His interactions with the dog and moments like eating the mint are reveled with the execution on screen.

That's only one side of the coin though and despite its ambitious ideas and solid execution..."Wrecked" comes off as a tedious film too. Sans a rather interesting antagonist (its a damn mountain lion!) and some clever story telling techniques - the film is boring. Not a whole lot happens. We spend the first act stuck in the passenger seat of a car and the rest of the film crawling around in moss, sitting in rain, and cursing. When it does amp up (having to cross the river for example) the film actually gets the thriller aspect across nicely. It's just not as often as one would hope.

Film makers should certainly take a look at the gutsy things that "Wrecked" does so well, but beyond that your average movie viewer is going to find this movie lackluster and boring. It's a duality that does rear its head at moments and is a concern for viewers, but if one is willing to step out and look at its detailing then there is plenty to love about "Wrecked".