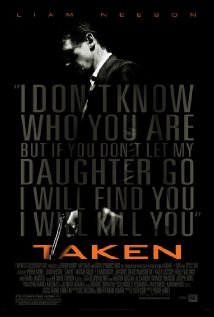 Revenge thrillers are a dime a dozen. I don't even want to go through this site to see how many revenge thrillers we have even reviewed let alone how many are yet to be reviewed. Some of them try to do unique things with their stories or characters, but it doesn't always work. That is what makes "Taken" such an effective film. It really doesn't do anything gimmicky with its story. It sticks to the basics, but it sells them so well with its execution I was gripped by the jugular throughout the entire thing. Now that is a good action/thriller.

Bryan Mills (Neeson) seems like your average father. He has left his job to be closer to his daughter (Grace) when his ex-wife (Janssen) moves to L.A. with her new man. He struggles with his money and does his best to be the father he wasn't before. When his daughter is kidnapped on a trip to Paris though, his previous job as a black ops "preventer" comes in handy as he tears through France to find his daughter.

Building on a script written by Blood Brothers favorite Luc Besson and partnering it with the direction of Pierre Morel (who had teamed up prior on the charismatic "District B13"), "Taken" brings two very talented French film artists with the charming and often intense performance of Liam Neeson. This combination positively proves lethal here. The wickedly fast pace of the film is matched with the intensity of Neeson's performance (who delivers some B-movie lines with some much vigor and ferocity that it works) and Morel brings out the best of its over the top moments so that the film weaves through its genre-esque moments and makes it seem like a legit thriller. Albanian women smugglers? French spies? Middle Eastern connections? This should come off as a cheap action film, but it rarely does. It's intense and effective instead.

"Taken" does suffer from its B-grade moments though. The ending is a bit tacked on, some of the supporting cast are ill developed, and one has to suspend some logic to get where the film wants you to go (like recognizing the man's voice from the phone call in person a couple days later). If you can leap over these minute flaws though, "Taken" will take you for a ride.

Fans of Besson or the up-and-coming Morel will find more than enough to love about "Taken". It has some amazingly awesome quotes (including one of the best monologues I've heard in a genre film in a long time), the action is solid as Neeson kicks ass, takes their name, and kicks their ass again, and the charm of the style and performances wins over the flaws. This is one of my favorite films of the last decade and one that modern thrillers will compete against.