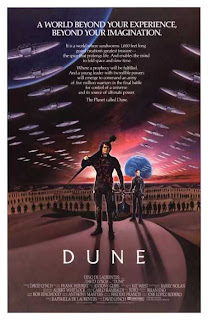 Director: David Lynch
"Epic Fail" is such an overused term today. Perhaps a more apt description of Dune is "epic catastrophe" since Dune is one of the most over-blown, unfocused adaptions of a celebrated novel of all times. Big budget, tremendous cast, talented director, epic story... how the hell did this go so terribly wrong? Let's just call it a conflict of interests on what the final outcome of the film should be. The plot is tremendously complicated so here is a real quick, dumbed-down synopsis.
Basically, everyone in a distant galaxy wants their hands on the planet "Dune" as a spice that's harvested below its desert terrain allows for space travel. We have three feuding groups trying to control the planet and it's up to what I like to call "The One" to lead some rebels by riding giant sandworms to free the planet from its iron grip of dictators. Yea, it's complicated.
Visionary director David Lynch seemed like the perfect choice after getting numerous nominations for his emotional driving Elephant Man, yet he seems helpless with adapting a book that he never read prior and that was labeled "unfilmable" by many. Due to the complex nature of the story, Lynch is powerless to give the film a cohesive flow with too many characters and side plots for a two-hour and twenty-minute film. As a result, audience members were given a pamphlet when they entered the theatre defining terms and characters. That in itself is a dead giveaway that you failed on being able to tell an unyielding story.
Despite the convoluted plot, the special effects and production design and awe-inspiring and makes me grow sad that the glory days of practical effects are gone for good. Seriously these giant sandworms are great! The set designs are complex and gorgeous, mixing old nautical with futuristic designs. These just make beautiful backdrops to the powerful rock score by award-winning band Toto. Sad to say amazing visuals don't make a workable film and Dune fails on the level of making a plot any fluidity (much of the dialogue is even rendered to characters talking in their minds which becomes insanely annoying).
In the end, we get everyone pissed off at each other. Lynch was mad at producers for forcing him to cram an epic novel into two hours and producers were pissed at Lynch whose original cut ran over three hours long. Fans of the novel were pissed at the truncated story and everyday audience members were pissed that they had to read a pamphlet to get what the hell was going on. It was a no-win situation as there was no way in hell all four parties were going to be happy with any outcome of the film. Today Dune is more of a curiosity piece chronicling how a celebrated novel can go awry in the world of Hollywood. The film is visually stunning but at its core Dune is hallow with confusion and unintentional laughs winning out. Seriously, who thought the scene with Sting in a small winged bikini was a good idea? Fans of the novel are actually better off checking out the extended TV version or the 2000 TV miniseries which has no time restraints on making the plot actually tangible.