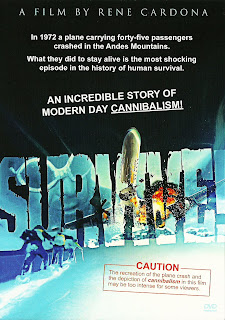 The media world was rocked in 1972 when the story leaked about the South American rugby team that crash-landed in the Andes and to resort to cannibalism of the dead in order to survive. The story inspired the film "Alive" 20 years later but few know today that a film version of their astonishing story was actually made 15 years before... by the Mexicans! What a minute... a Mexican film.... directed by an exploitation director ... starring Hugo Stiglitz... yea this is going to be real 'respectable' adaption.

The story is well known already with multiple books and a movie.. wait... two movie adaptions. A plane containing 45 passengers, mostly a rugby team and their families, crash-landed in the Andes on their way to a game in Chile. Due to various errors a rescue team was unable to find the crash site and the survivors were stuck in the mountains for 72 days resulting in them resorting to cannibalism to stay alive.

With disaster films ruling the cinemas in the 70s this tremendous chronicle of survival would be ripe picking for a film adaption... just who would of thunk the Mexicans would have beat the American's to the punch? Being familiar with a few works of cult director René Cardona I wasn't expecting much with this film adaption and surprise, I didn't like it!

A plot of this nature can't be made on the cheap and that is the main problem is that the production values are too damn low for the story potential. The effects of the plane crashing in the beginning is rather poor not to mention the mountains of fake snow.

The acting is as stiff and fake as the snow piled on the ground. Hugo Stiglitz, one of Mexico's most popular actors, is as unwatchable as ever. Seriously why the hell is this guy so popular down there? The American cut of the film even offers pain enduing dubbing that spouts off the plot elements like going down the list.

Director René Cardona is a popular exploitation director and it comes to no surprise that he focuses in on the cannibalism of the plot, exploiting the hell out of it. The cannibalism segments, though tame compared to films to come later in the decade, are graphic for the time but it just seems at odds with the rest of the plot which focuses on 'being based on a true story'.

"Survive!" is a cheap, shoddy adaption of a chilling real life disaster. If it were just a trashy bargain basement disaster film from South of the border then it would have been an exploitative good time but as is the exploitation elements clash with the filmmakers trying to tell a proper 'true story'. The film is slightly better in its uncut Mexican version which does away with the annoying narrator but beware, the uncut version on the VCI DVD release doesn't have English subtitles so unless you speak Spanish then you're shit out of luck.