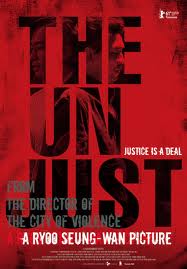 There are two reasons that "The Unjust" made my viewing queue. First reason: its a South Korean thriller and its a well known fact that South Korea has been putting out only the best in thrillers at this time. Second reason: its from the director of the stylish and brutal "The City Of Violence". Granted "The Unjust" is a solid thriller, but it is very slow paced one that focuses on subtlety of detail and the gray morality of its characters. One that more often than not succeeds in getting the point across, but can pull teeth in doing so.

Choi Cheol-gi (Jeong-min Hwang) is a police detective who has been desperately trying to work his way to a promotion, but finding his connections in the force hindered by politics. When the government comes down on the force for its lacking results concerning a child serial killer, he is given the chance to find the killer or it all comes down. Now Choi must head off with a well connected prosecutor Joo-yang (Seung-beom Ryu) about this case. And a few pieces of dirt in their past may come up in the process...

Perhaps its because I know very little about the Korean justice system or how it works (seems pretty similar to the US in all honesty), but it was hard for me to delve into "The Unjust". The story can be insanely complicated with a slew of secondary characters and enough plot twists to meld your mind into a knot. On top of that, it requires a very distinct memory for detail to watch how it all comes together. This detail orientation and "anti-hero" characters are enough to turn off much of the main going thriller audience.

That being said now, its also these elements that make "The Unjust" as powerful as it is. If you are willing to look past the blurry lines of good and evil and you are able to keep the details straight then the finale for the film is a one-two punch to the gut. It makes all the difference that you pay as close attention as possible for it to work and when it does - "The Unjust" can be a beast of a film with some very intriguing aspects to it.

"The Unjust" is not for everyone. It's very slow, very detailed, and very character driven. Although director Seung-wan Ryoo's style is still present with some clever shots and energetic moments, this film is very different from "The City Of Violence". The film is very impactful, but only for those willing to put the effort into its complex storytelling.

Written By Matt Reifschneider
Posted by DarkReif at 12:41 PM