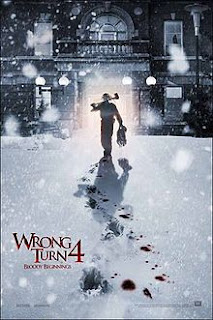 After a leap of ridiculousness (and awesomeness) that was "Wrong Turn 2", this franchise sank quickly. The third entry was pretty abysmal itself and the returning director for this fourth film (technically a prequel) certainly didn't have my hopes up. Turns out this franchise took a 'wrong turn' with this one leaving it stranded as the worst one yet with its cliche and uninspired story and low end execution.

A group of young college students in 2003 go to head to a cabin in the West Virginia woods for a winter break on their snow mobiles. When a massive storm derails their trip, they find themselves staying in an abandoned mental hospital that just so happens to be escape place of three inbred and very vicious cannibal men...

Unfortunately, when snow is the most unique element of a film...it's looking as bleak as the winter weather. Beyond the setting, "Wrong Turn 4" lacks in every element. The characters are unmemorable, poorly acted, and cut-out thin, the directing is simply par and fails to utilize the potential of many elements, and the kills within the plot as by-the-numbers as possible. The plot simply is so basic that it invests no interest from the audience to the well being of characters.

Our now recognizable villains of the franchise are also poorly used. The distinct characteristics of each (which is so very stressed in the opening sequence where we see them as youth escaping from their imprisonment) are never revisited and their killing acts are borderline knee-slappingly funny in their oddity. Barb wire noose? I'll go with it I guess. Giant drill? Oh so much more could have been done with that. At this point, the franchise should be giving these inbred hillbillies more of a challenge with their prey and a bit more distinction to raise them to the level of classics like Freddy or Jason. "Wrong Turn 4" does not do that at all.

The point of "Wrong Turn 4" simply goes through the motions. Never deviates too far and never invests enough into the audience. It's a slasher by the numbers at its core and does nothing to give it anything memorable. Although I will continue to follow the franchise (...that's the franchise whore in me), its discouraging to see the dive-bomb in quality for this fourth entry. Oh well. Let bygones be inbred cannibals. Here's to a relapse of quality for "Wrong Turn 5"!