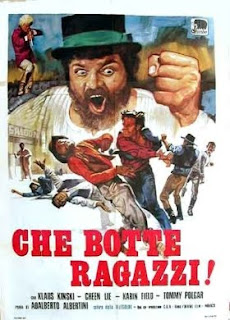 "Shanghai Joe" is another attempt at a 'east meets west' scenario. Unlike better films such as "Blood Money" and "Red Sun", "Shanghai Joe" fails miserably by making a painfully unfunny cash-in on the comedy duo subgenre jump started by the "Trinity" films. To top it off the distributors here in America pulled an "Operation Condor" and released the sequel as the "first" film. Yes, despite the title, this is actually better known as "The Return of Shanghai Joe" in the rest of the world and is a follow-up to "The Fighting Fists of Shanghai Joe". Unbeknownst to me I was actually watching a rather poor sequel without prior knowledge and having not watched "Fighting Fists" yet I cannot draw proper comparisons to the actual first film in the series.

What we have here is a small town under the tight grip of a corrupt and sadistic entrepreneur (played by Klaus Kinski) who buys land by any means necessary, especially if oil is present. In comes a big burly salesman who threatens his business so with the help of a traveling chinaman and a judge, the death grip of this psychotic businessman needs to be brought to an end.

Despite the title the film actually focuses on the burly salesman, a character most definitely inspired by the loveable brute Bud Spencer. Unlike Spencer, Bill Cannon has none of his charm. Shanghai Joe is even played by a different actor (Cheen Lie as opposed to Chen Lee) and he also lacks any charisma for a likeable martial arts lead and can't even fight that well to boot. Together they make an absolute forgettable and nauseating sidekick duo.

The film is saved by eccentric actor Klaus Kinski, whom played a different character in the first "Shanghai Joe" film. Here he actually has a lot of screen time and he chews up the scenery ever shot he's in. He even breaks the fourth wall at one point looking directly at the audience to mutter "the dead cannot bare witness". Oh yes... heads will roll.

Director Bitto Albertini is an unknown in the genre and rightfully so as he seems as inept at directing a western as a martial arts flick. Under his direction our duo seem lost without direction and he chooses to blare the laughable title song over any fight Joe gets into.

From what I've gathered the original "Fighting Fists of Shanghai Joe" is a far better film (I do plan to review it soon). As is, this sequel is rather worthless and it fails on every level imaginable: a martial arts western as well as a sidekick picture. Only notable for an interesting performance by Klaus Kinski otherwise this is just s cheap piece of Spaghetti Western drivel with no flair or style.