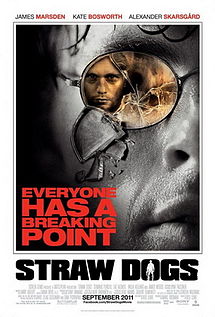 Here's the deal with "Straw Dogs". It's been decades since I've seen the original one, so I'm going to keep my detail comparisons short and let's be honest...my hopes were rather high up for this one. Unfortunately, the story just didn't translate to a modern setting as well and thusly lost some of the impact it had. Not unlike films like "Let Me In", this just happens to feel like a completely unnecessary remake - and one where the added elements (or lacking elements) didn't really give us the needed jolt to kick it. Leaving us a film that desperately tries to balance being a mainstream thriller and the gray area extremities that made the original one so memorable.

David (Marsden) and Amy (Bosworth) are heading back to her home country of Mississippi so that he can continue writing his newest screenplay. She isn't very happy about the idea considering her ex-boyfriend Charlie (Skarsgard) is going to be rebuilding the roof on the barn and it had taken her a very long time to get out. When tensions rise between the couple and the locals (along with one another) though, its David and Amy who might be the first to crack under the pressure from the local 'straw dogs'...with violent consequences.

The biggest flaw with this modernization of "Straw Dogs" is just how flat it can fall. Despite the blatant use of symbolism in the film (he's writing a screenplay about the siege of Stalingrad, the hunting exercise/rape sequence), some of it seemingly just falls under the spell of being...dare I say it...mundane. For a film that graphically displays the transformation of civilized people into bestial survival, its hard to say it went far enough. It felt like it was trying too hard not to offend people, when that's the extremes they should have gone to...its a modern day so you have to go pretty far to offend folk. So "Straw Dogs" simply doesn't make the cut at the biggest key element to sell the film.

As for execution beyond its plot progressions, I felt like "Straw Dogs" did its job well enough. The casting (which some critics panned it for) didn't really effect me all that much with Marsden earning the froofy man quality nicely and Skarsgard hulks his way across the film with subtle effectiveness. Even the hit or miss Bosworth earned some merit in a few scenes. My biggest issue is that director Lurie just doesn't push it far enough. Marsden doesn't give us the despicable anti-hero at the end we needed (in fact, we sort of root for the extreme violence instead of be shocked by it) and its attempts at being too artsy hindered some of the story telling aspects.

"Straw Dogs" is a fine film, but even as a thriller/home siege film it tends to try to play it too artsy. As for an art film that displays the transformation of man into a surviving mechanism...it plays it too safe. This remake just tries to ride the line too finely and it ends up making both of its sides mediocre. Mostly a film for the curious in the end.