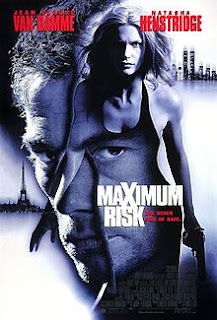 Just the combination of Jean-Claude Van Damme, Natasha Henstridge, and director Ringo Lam should perk any self proclaimed action fan's ears. Throw on top of those elements a story about lost twins and the Russian mafia and this should be B-action movie heaven...too bad it takes itself far too seriously to be the cheesy riot it should have been. Of course it does have some redeeming moments in its play time, but overall it is a rather disappointing action films that sports a talented director playing it very safe.

Alain Moreau (Van Damme) is surprised to find a dead body in Nice, France that looks exactly like him. As it would turn out, its his long lost twin brother who seems to have some serious connections to the Russian mob in America. Determined to find out why his brother was killed and what he was doing in his town, Alain heads to the US only to find an upheaval in the mafia ranks that leave him and his brother's girlfriend (Henstridge) in immense danger...

The let down I felt with "Maximum Risk" is pretty immense. The talent of director Ringo Lam (he even made "Twin Dragons" an entertaining and silly flick despite its horrid script) is put on ice as he seemingly goes through the motions with the film - very much crafting a film for American mainstream audiences. This only adds to the rather mundane quality of how serious the film plays out its ridiculous plot. The bleak look of the film mixed with some rather hit or miss performances (when Van Damme gives one of the stronger performances for the flick you know you are not in good territory - at least not in 1996) doesn't lift the film from its mediocrity either.

Luckily, "Maximum Risk" doesn't lose all of its charm in the watered down style of the film. A reoccurring battle between Van Damme and a massive Russian blond villain is always a blast to watch (with a rather awkwardly awesome fight in a sauna with both only in towels about three-quarters into the film) and many of the action sequences are brutal enough to add to the lacking emotional relevance. How many hands and arms does Van Damme break? Who cares! It's awesome every time! The more the merrier!

In the end my expectations for "Maximum Risk" lead to some hefty disappointment. Ringo Lam seems on cruise control, Van Damme ably kicks some ass but plays it a bit too seriously in his subtlety, and the lacking embrace of the ridiculous plot twists only drag the film down (sans the very outrageous finale in France). Although it has its moments, this is far from being either Lam or Van Damme's best film.

Written By Matt Reifschneider
Posted by DarkReif at 8:38 PM