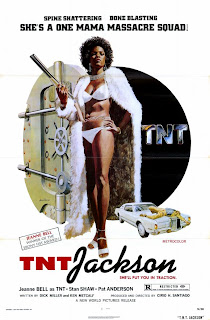 A Filipino made Blaxploition martial arts film that takes place in Hong Kong... how the hell did they pull off that weird amalgamation? Well "pull off" wouldn't be the the proper term but at least it's somewhat watchable... to an extent I guess.

TNT Jackson arrives in Hong Kong to find her missing brother only to get entangled in some heroin runners and undercover cops. Lots of fighting is the result.

Our title character is portrayed former Playboy playmate Jeannie Bell and it's obvious she has no martial arts background as her fighting is clumsy at best. She also lacks charisma and is a poor copycat and much more interesting characters portrayed by Pam Grier. What she lacks in on screen grace, filmmakers try to make up with in titillating nudity as we even get to see her fight four guys in a dark room topless only clad in panties (a scene that the director would later use in his film "Firecracker").

Filipino exploitation B-movie director Cirio H. Santiago has always been shoddy at best but TNT Jackson, an early film in his career, is far more thoroughly directed than his normal effort. Still his fighting sequences are all poorly staged, some even containing sound effects of hits that don't even connect. He also likes to use speed ups to make hits/kicks/throws look faster. Hell even utilizes the old Roger Corman trick of removing frames in order for the fights look faster and more brutal.

This shoddy effort fails as either a Blaxploitation or martial arts film thanks to poorly choreographed fights and a main star that lacks presence thanks to stiff acting. Still, for fans of trashy entertainment, it's worth a look for some unintentional laughs and nudity otherwise people are better off looking up Santiago's 1980 martial arts effort "Firecracker" which stars a women with some actual martial arts training.

The film was in public domain hell as many DVDs exist with poor VHS transfers. Shout Factory released a beautiful anamorphic widescreen transfer in triple feature alongside "Firecracker" and "Too Hot Too Handle", two other Roger Corman distributed exploitation 'classics.'