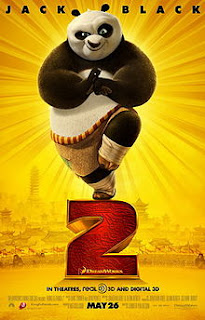 Well if it isn't our favorite fist and feet wielding Panda? Back for seconds, I see. Can a second portion of animated kung fu madness keep us full as the first portion did? Truthfully, the answer is no. There are a few reasons that "Kung Fu Panda 2" doesn't quite make the cut to match its predecessor, but that doesn't stop it from being a fun and vibrant watch. This inevitable sequel is brighter, faster, and more epic and it does play on a few great concepts.

Po (Black) and the Furious Five have been hard at work with their kung fu when word from across China comes to them that Lord Shen (Oldman) has killed Master Thundering Rhino and taken over Gongmen City with the use of a newly developed weapon...the cannon. Now Po and the Furious Five must travel to the massive city and restore justice, but Po might have to face some demons of his unknown past to do so.

As with the original "Kung Fu Panda", this sequel does work on the two levels. Just not quite as well. Yes, the visuals are once again stunning with the luxurious colors, high end animation, and Chinese style of the film that are utilized to their full advantage. The epic battle sequences are vivid with spectacle (including massive explosions, toppling buildings, and larger kung fu moments - even if the 'choreography' for the kung fu seems to be placed on hold for the sake of the visuals) and in these parts - "Kung Fu Panda 2" is an entertaining watch.

As for being another homage to kung fu films, the obvious pulled story lines of Po's almost revenge like quest in the latter half and the kung fu vs. guns portion that is taken from "Once Upon A Time In China" make for some great moments. Unfortunately, the flow of the film doesn't combine the two aspects as well. Some of Po's character growth seems rushed and forced and the humor is massively hit or miss. The film also fails to fully use some of its potential with its characters (most notably the lack of Master Croc and Master Storming Ox to give us some new kung fu combatants to use against our bladed villain) and it leaves it feeling a bit too epic for its own good to fit it all in.

Don't misunderstand this review though, "Kung Fu Panda 2" is still a blast to watch. The characters (that are used) are still a riot to follow and villain of the picture is just as strong as the villain in the first film. It's epic and has gloriously animated sequences. The sequel just doesn't contain the same flow of its epic story that made the first film just a surprisingly solid feature. Still a great film for the whole family and I, for one, will be anxiously awaiting the hinted at third entry.