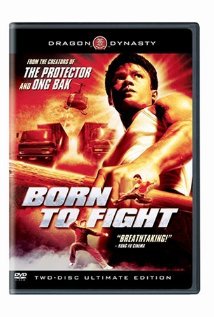 After crafting some very cool stunts in the internationally successful "Ong Bak", stunt coordinator Panna Rittikrai helmed a couple of films in 2004 - one of them being "Born To Fight". Although the sheer amount of stunt work in the film will certainly impress action fans, its hard to say that quantity overcomes quality in this silly action film. Nothing else in the film seems to be well crafted and even the stunt work seems illogically set up for the sake of the stunt and it leaves "Born To Fight" registering nil in the intelligence area.

Deaw (Chupong) just lost his mentor and friend as the two undercover cops busted a massive drug and black market trafficking kingpin. To sooth his sorrows he joins his Tae Kwon Do champion sister on a trip to donate materials and gear to a local village. A local village that just so happens to be the target of a militant group who needs hostages to get their boss out of prison. Deaw and a hodge podge group of skilled athletes must now fight off their captors before they decide to nuke Bangkok (?).

Rittikrai must have a hard on for Cannon Films because "Born To Fight" feels like one of their sub-classic 80s action films. The logic for the plot is missing along with any sort of acting or good writing, but the action is essentially non-stop and high octane. Although most of the stunts are obviously staged and flow through these action sequences is choppy at best, the sheer amount of stunts (with more than enough people flying and bouncing off of vehicles/shacks) is rather impressive. Did I want to see a nonsensical martial arts fight with flaming logs? Not initially, but the idea is pretty legit!

Past the insane amount of writhing bodies and medical costs that this film racks up, "Born To Fight" is about as bad as you can get. Our lead hero is as flat as the boards he uses to beat down baddies with (and about as charming too) and the lacking character work really makes the forced emotional moments, like the crying child over her father's execution in the village, too awkward to work. Not only that, but the progression of the plot is as illogical as its ridiculous stunt work. Why does the nuclear missile miss Bangkok? Why do we have a one legged soccer player doing stunts with his crutch? "Born To Fight" leaves the audience scratching their head in confusion more often than not which only adds to the frustration of its poor storytelling.

Rittikrai shows some knack for cool sequences (even using a fairly cool and long uncut stunt-athon camera shot in the finale - a move he would perfect in choreography with "The Protector"), but the script and piss poor acting of the film undermines anything good that goes for it. The style is used sparingly and the substance is non existent. There are much better Thai action films out there to enjoy. Check out his slightly better work on "Ong Back 2" and "3" instead.