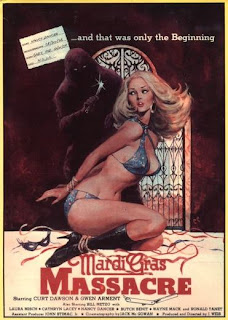 I'm very forgiving towards ultra low budget drive-in type horror films of the 70s and 80s for the simple fact it was actually hard to make movies back in the day with limited funds and resources (unlike today where any talentless ass wipe can buy a cheap digital video camera, edit their own filth on their personal laptop and somehow convince Lionsgate to release it on DVD). However, even with a promising title like "Mardi Gras Massacre", this film comes off completely incompetent with no entrainment value what-so-ever, even on an unintentional level.

The simple plot has an rich, high class asshole who goes around flashing cash and asking bartenders and pimps where he can find the most "evil" women. He then proceeds to take these hookers to his secrete chamber where he brutally sacrifices them to his Aztec God while wearing a gold mask. He disposes their bodies on railroad tracks (why I don't know as this seems like a terrible place to "hide" a body) and two bumbling cops somehow can't crack the case despite oodles of evidence pointing them in the right direction.

Die-hard horror fanatics will notice the similarities between this and the plot to Herschell Gordon Lewis's splatter classic "Blood Feast" where a psychopath also sacrifices women to an ancient God. Unlike that film, "Mardi Gras Massacre" lacks any of the campy charm that made "Blood Feast" such a hoot.

Lewis also knew he didn't have enough plot to pad it to a full hour and a half and made it last comfortable hour. Not director Jack Weis as he loads up "Mardi Gras Massacre" with so much filler that I nearly fell asleep on numerous occasions. Each killing is shown in its entirety and by the third time it grows very weary and boring. We also get plenty of filler with him stocking up on footage of disco dancing and cops beating the streets asking pedestrians questions. Mix all that with a low speed chase with a station wagon, shoddy editing, non-acting and boring point-and-shoot directing and your guaranteed a film to cure your insomnia.

There's tons of female flesh present for people that judge a films quality on that aspect alone but "Mardi Gras Massacre" is just a BAD movie, and NOT so BAD it's GOOD. There isn't one aspect of this film that I can recommend, it just plain and simple sucks. I knew I was in trouble when the title card on the film literally had the title painted on a piece of plastic held up in front of the camera complete with shadows of people moving behind it. A sure sign of quality!

What kills me more is that Code Red DVD, one my favorite companies, put so much effort into releasing this hunk of crap. They did a tremendous job transferring the film from its last remaining 1" tape master source (all prints and negatives have been lost). Well I believe all films, including awful one's like "Mardi Gras Massacre", deserve to be preserved in the digital format even for historical context and for that I thank Code Red. I do appreciate them also including a beautiful horror host on the DVD release that bookends the movie which eases the pain of the film experience.

Written By Eric Reifschneider
Posted by Cronosmantas at 2:03 PM