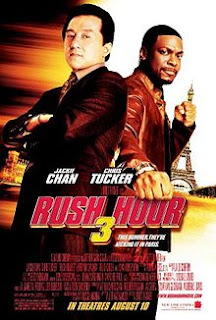 I was really torn about "Rush Hour 3". On one side, I love Jackie Chan. On the other side, I really hate Michael Bay Jr....err....Brett Ratner. As for Chris Tucker, meh. I'm on both sides. Thusly, I waited four years to finally watch the third entry into this overly long franchise to hopefully shake my doubts. It would turn out all of my doubts were legitimized. "Rush Hour 3" is the exact same formula as the first two with fewer laughs, forced chemistry, and generally lackluster action sequences. A real winner.

Detective Lee (Chan) has returned to Los Angeles to once again guard Ambassador Han as a summit concerning the world wide issue of the Triad leaders and their shifting membership. When an assassination attempt goes wrong, Lee must once again team up with Carter (Tucker) to track down the assailant all the way to France and stop a larger scheme of the Triads.

All right class. Today is a lesson on the formula of buddy cop movies and more specifically, the now completely worn out blueprint of the "Rush Hour" franchise. You start with two very different individuals who are thrust together by larger circumstances out of their control. In this case, once again, Jackie Chan and Chris Tucker. For "Rush Hour 3" though, let's take out any chemistry between the two, write in dialog that seems forced and often far more racist than normal, and make the same jokes we've now seen twice before. Then you throw them into an action packed and often foreign setting for one or both of the main characters. In this case, they have to go to France where they can make all kinds of ridiculous jokes about stuffy characters and get to do some off the wall action/comedy sequences in odd places like French sewers, a card club, and as usual the Eiffel Tower. Just make sure its as by the numbers as possible so not to confuse the obviously silly audience.

As you can tell from the sarcasm - "Rush Hour 3" is needed as much as being shot in the leg. Yeah, its not going to kill you, but its going to hurt like hell going through it and you might not forget it very quickly. Everything that makes a great buddy cop movie is forced in this one with its silly script, poor character development, and lackluster chemistry. Even the action sequences seem to be very defined in their moment, rarely utilizing the amazing stunt work of Chan, the humor of Tucker, or sensibility to how they are placed. Very rarely did I laugh out loud or even smile as I struggled to comprehend just what Ratner or company were thinking when doing this film. Not good for an action comedy.

It has some moments here and there, but it never touches the fun or spark that even "Rush Hour 2" had. If I had to write this review with only two words it would be the following: forced awkwardness. Not what I want to see from the charming Chan or the somewhat digestible Tucker. Here's to hoping its the end of an era.