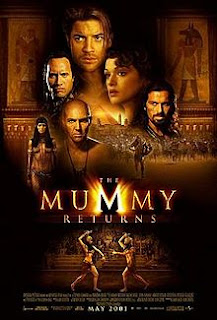 When a blockbuster action/adventure film on the scale of The Mummy succeeds, the eventual sequel needs to top it. In many ways, The Mummy Returns does this. The action is more epic. The plot is more epic. The characters more epic. Yet, the one element it doesn't top the original one with is the most important one. Quality. Although its a fun film, The Mummy Returns simply forces it all to work together and the chemistry that made the original one work so well is abruptly missing.

The O'Connell's Rick (Fraser) and Evey (Weisz) with new young son Alex (Boath) are on their latest adventure searching for the Bracelet Of Anubis that holds the key to discovering a lost oasis and a hidden myth of The Scorpion King (The Rock). Unknown to them, a group of villainous characters including a resurrected Anck-su-namun are bound to bring back Imhotep (Vosloo) to take the bracelet and kill The Scorpion King gaining control of the Army Of Anubis. Now its a race to a lost oasis to see who will take control of the army and save the world.

Call it epic, because that's what the plot to The Mummy Returns is. So epic in fact that director/writer Sommers and company decide to completely leave logic buried with its head in the sand. Why is Anck-su-namun reincarnated? Why is there suddenly all of this talk about past lives and Evey's now a ninja when it comes to fighting? Why is there a fucking blimp and a gold toothed lackey with no screen time? Half of the stuff just seems jammed into the film for the sake of making it look and feel epic. Rather haphazardly might I add.

Now to the film's benefit, it is a riot to watch. It's over the top and ridiculous to the point of insanity with some of its nonsensical plot turns, but fun nonetheless if you check your intelligence at the door. The movie plays up the special effects to its fullest throwing in a massive army of dog headed soldiers of the underworld, a double decker bus chase sequence with decaying mummies, a massive water way run for survival, and a finale where the Rock has his CGI face planted on a giant scorpion monster. Unfortunately, these special effects are give or take with some of them rocking (our bus chase highlights the film) and some of them sucking (The Rock Monster is atrocious) even if the action sequences are solid enough.

This is all scattered with forced chemistry from the cast. Fraser and Weisz have their moments, but damn this movie lacks the charm that made the first one work like it did. Our villain is rarely frightening (in the case of The Rock-trocity at the end - they are hilarious!) and the one horror aspect of the film is a silly killer mummy monkey slaughter. Yeah. Killer mummy monkey slaughter. With blow guns included. It's ridiculous. The heroes aren't as heroic and the villains not as evil. Not good for a movie about 'good vs evil'. It tends to detract from the B-movie fun instead of add to it.

The cast seems off, the humor is forced, and the epic story requires a bit of a lowered IQ to really enjoy. There is an enjoyment to its low brow adventure stereotypes, but its something where one has to turn off the thinking cap to really grab onto it. Kill me, but I enjoy The Mummy Returns just a smidge for its ridiculousness even if its nothing compared to the first entry.