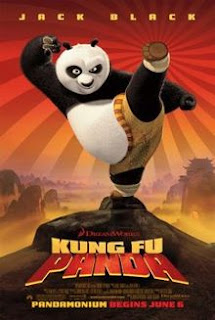 There is something magical when a film can exist at two different levels for different people. "Kung Fu Panda" does just that. It exists on the surface as a cartoon with goofy animals for characters that have to learn the moral lessons to defeat the foe and be heroes. This is fine and dandy, but the true treat in this film is that it also exists as an homage to classic martial arts (specifically kung fu) films that fans of the genre will catch. Thusly, as a fan of both, I was completely enamored with "Kung Fu Panda". Yeah, it can be cliche at times, but it works on these two levels with relative ease.

Po (Black) is the panda son of a simple noodle maker and despite ambitions of being a great kung fu master, his awkwardness and general clumsiness prevents him from being the hero he wants to be. That is until the evil Tai Lung (McShane) escapes his massive prison to come take the Dragon Scroll from his old teacher. Now Po must fulfill a prophecy to become the Dragon Warrior and defeat the evil kung fu master. Can he use the lessons of his master and the Furious Five to train in time or is the prophecy simply a fluke?

As an animated feature film, "Kung Fu Panda" succeeds. It's funny, the colors are vibrant and bright with excellent animation, and its script is meticulously crafted with finesse that allows kids to enjoy its basic "good vs evil" concept. Our lead Po is fun and Jack Black delivers the lines with relative ease (the guy is basically a cartoon character in real life) and its fun and streamlined characters are a blast to watch on screen.

That's not really why "Kung Fu Panda" is being reviewed here on Blood Brothers though. It's because of how well it homages classic kung fu movies. Combining elements of Kar Lau Leung's now distinct training motifs he used in his Shaw Brothers films and obvious influences within the animation style and its plot details (the animals are all styles of kung fu - tiger, snake, crane, etc) this film is a perfect homage. Director Stevenson obviously had all the right intentions when he decided to make it an homage instead of a spoof and it works brilliantly for an animated film. Even the action sequences are well "choreographed" martial arts fights that blend the epic settings and action with some great kung fu. The bridge battle highlights the film for sure.

"Kung Fu Panda" just works in some many of its elements so well. It's a beautiful film that pulls on animation styles from Chinese culture and its an insanely fun romp that boils down the martial arts film into its basics yet still retains the heart of why the genre is so influential. It's a duel blade sword that is sharp on both ends and is a must see for kung fu fanatics. A great way to introduce the whole family into the style.