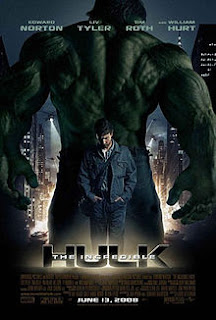 Ironically, "The Incredible Hulk" is the weakest film of the Marvel Cinematic Universe. Although still a rather fun romp of larger than life action set pieces and ridiculous visual effects, this reboot of the Hulk character to fit into the story leading up to 2012's "Avengers" feels unfinished more often than not and misses out on some of the needed flow to make it work.

Dr. Bruce Banner (Norton) had an accident when working some gamma radiation for a military contract. A super blast of gamma rays now turns him into an instinctual creature where anger makes physically changes his body into a green monster of super strength and speed. On the run and trying to figure out a cure for his "curse", Banner must confront the military chasing him and return to his lost love (Tyler) to find it.

There are a lot of elements to "The Incredible Hulk" that do work. The special effects are top notch, the casting is more than impressive with particular nods to Norton as our hero and Roth as Abomination - I can do without Liv Tyler in any movie, and Leterrier does some amiable things to keep the film visually arresting. The finale (with a massive Hulk vs. Abomination throw down in the streets and rooftops of New York) is particularly thrilling with its massive destruction and stylish camera play. In a sense, the action and effects of "Incredible Hulk" are easily the highlight of the film.

I also admire the attempts at really building a solid character back story and human experience for Banner and company. 'Attempts' is the key word of that last sentence. Despite some heart felt strategies of love, family, and anger management to give depth to our cast so much of their chemistry is forced and falls flat. Norton and Tyler are rather awkward together and Roth's limited screen time is rushed as it pushes his villainous ways into speedy hyper mode to get it done for the finale. Leterrier knows how to keep it visually stimulating and work style into the action, but seemingly seems inept at making the emotional relevance hit home.

Generally speaking, "The Incredible Hulk" puts so much stress on a rather weakly executed character development that the film just struggles to put its story to bed. It's blatantly obvious that it was meant to be the first of its own franchise (with suggestions that a sequel will unfold after "The Avengers" hits) and the film leaves far too many questions unanswered in the forefront. Of course the film does succeed at being fun and stylish, but its lacking heartstrings and "partial story" plot progression hurt it far more than action and big monsters fighting could heal.

On the plus side: it's plenty better than "Hulk", but that's not saying much.