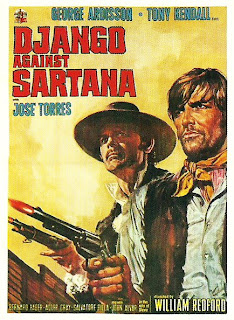 Another year, another unofficial "Django" and "Sartana" cross-over film and to be honest after suffering through two horrid films by director Demofilo Fidani that featured both iconic characters ("One Damned Day at Dawn... Django Meets Sartana!" and "Django and Sartana are Coming... It's the End!"), I wasn't expecting a whole hell-of-a lot out of "Django Against Sartana". Well for one thing this one isn't directed by the contemptible Fidani so right there it's guaranteed to be better... and ta du... it is!

Well Django's brother gets hung after being accused of robbing a bank with Sartana. Django saddles up his horse for vengeance and after a bloody battle, Sartana and Django team up to find the real culprits.

Fidani's crapfests never lived up to the potential of having two of the genre's most iconic character in the same film but this one, surprisingly, does for the most part. First of all it contains both characters for the entire running time of the film! Not only are both in the entire film but they also share plenty of screen time together, including an epic fist fight (that starts with riding two horses at one another "Mission: Impossible II" style) and finally teaming up to work on solving a crime.

George Ardisson and Tony Kendall both play the respective roles well though not exactly like Franco Nero and Gianni Garko in their original portrayals but one shouldn't expect them to be as this is, of course, an unofficial sequel to both films. Kednall's character looks more like a cheap knock-off of Garko's Sartana and Django doesn't wear his trademark Yankee soldier uniform but then again... this is unofficial.

What hurts the trashy potential of this film is the very standard plot. Director Pasquale Squitieri would later grace us the mega-smart and stylistic period Poliziotteschi "I Am the Law" but here he's unable to craft an overly interesting plot to include both the Django and Sartana characters.

Out of all the three unofficial "Django" and "Sartana" cross-over films this is the ONLY one actually worth watching. The plot isn't much to cheer about but at least it delivers the goods by having both iconic characters beat the living shit out of each other as well as teaming up to shoot the shit out of some scum. I had fun with the cross-over concept and it should crack a smile on any Spaghetti Western fan's face.

Written By Eric Reifschneider
Posted by Cronosmantas at 7:01 PM