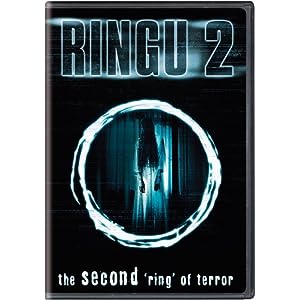 After the "Rasen" debacle, filmmakers decided to get the franchise back on track and released Ringu 2. Talk about a slap in the face to "Rasen" with a title like "Ringu 2". Adding the number "2" in the title is like saying "fuck you 'Rasen', I am the true sequel to 'Ringu'." Though I hate inconsistencies in sequel titles (since technically this is the third "Ringu" film) but after viewing "Rasen", the filmmakers had every right to call this "Ringu 2" as opposed to "Ringu 3". The title tells the audience to forget that science fiction horseshit sequel "Rasen" and go into this sequel with a clear mind. The filmmakers even hired original "Ringu" director Hideo Nakata to ensure this "proper" sequel would bring back the same feel and tone.

As soon as I started the film I knew I was going to have a much better time as, like I expected, this actually FEELS like a sequel to "Ringu". Back is the good old fashioned ghost story element that was SORELY lacking in "Rasen". The plot picks up right after the first film with Reiko and her son on the run after taking the cursed tape from her dead ex-husbands apartment. Authorities find her father dead (with a frozen face of terror) and are unable to find Reiko or her son. In comes Mai, the girlfriend of the ex-husband character in the original. She teams up with one of Reikos co-workers and ends up finding them. Giving them up to the authorities it is found out that Reiko's son is gaining the same psychic abilities of Sadako as that ghostly girl seems to be taking over his body. Now it's a battle to save the boy from the ghostly bitch from the well with an extremely strange "exorcism" scene involving a pool of water.

The best part of this film is the return of the creepy atmosphere and sense of dread that THE OTHER FILM did away with. Director Hideo Nakata even has more flare behind the camera giving this sequel more style and a sleeker look. However the film moves slowly and there a lot of plot holes and general stupidity that get in the way of the scares and atmosphere. First of all it tries to explain many questions left open in the first film (and I had many, believe me) but it ended up making me ask more questions! The answers just gave rise to more questions. Also it seems everyone in this film is starting to develop ESP. If they survived the original, then they are destined to have some sort of psychic ability in this one. Also the thing that seems to bug me the most is there are some characters, that have never seen the cursed tape, also seem to be haunted by Sadako. What the hell? This sequel is even breaking some its own rules established in the original.

All the plot holes nearly ruined this sequel for me but then a glimpse of "Rasen" would pop into my head and suddenly I would be less harsh on this film. Fans of the first film will love this sequels return to the franchises roots by making another old fashioned ghost story with lots of creepy moments and scares. If the plot holes become too much to handle, just think of "Rasen" and suddenly you will find that this sequel isn't that bad after all.

Bonus Rant: I love how actress Miki Nakatani returns as the character Mai Takano. She played the character Mai in the first film "Ringu" and also the sequel "Rasen". It just brings me a chuckle that in "Rasen" her character gives birth to a clone of herself that is possessed by Sadako. I know this film ignores "Rasen" but for some reason the thought of that character almost makes me laugh because of that ridiculous plot element in THAT OTHER FILM. Thanks again "Rasen"... you almost tarnished another film for me!

Written By Eric Reifschneider
Posted by DarkReif at 8:25 PM